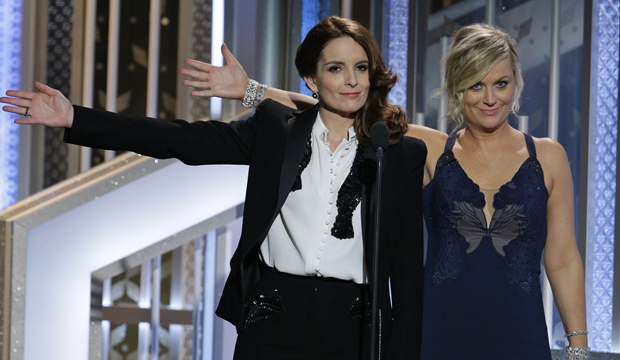 This year, the Golden Globe Awards will look a whole lot different than usual. Because of the coronavirus pandemic, Golden Globes producers and broadcast network NBC have put together a hybrid ceremony that includes an in-person element in both New York and Los Angeles as well as nominees spread around the world and attending via virtual technology. Gone are the banquet tables and free-flowing drinks Golden Globe attendees are accustomed to enjoying, replaced instead with trappings familiar to those who have been at home for almost a full year: video calls, tight-knit bubbles, and the potential for technical snafus.

What time are the Golden Globes?

The 2021 Golden Globe Awards take place on Sunday, February 28, beginning at 8 p.m. ET/5 p.m. PT. The 78th annual Golden Globes are set to take place in both New York (where Tina Fey will host from the legendary Rainbow Room) and Los Angeles (where Amy Poehler emcee from the Beverly Hilton, the usual Golden Globes location).

How to watch the Golden Globes on TV

How to watch the Golden Globes without cable

Who is hosting the Golden Globes?

Former “Saturday Night Live” Weekend Update co-anchors and long-time friends Tina Fey and Amy Poehler will host the Golden Globe Awards in 2021. This marks the fourth time the two comedians have served as ceremony emcees. Unlike previous years, however, the pair won’t host in the same place: because of the coronavirus pandemic, Fey is hosting the show from New York while Poehler will handle her duties in Los Angeles.

Who is presenting at the Golden Globes?

Joining the tribute to Jane Fonda for the Cecil B. DeMille Award are Laverne Cox, Ted Danson, Brie Larson, and Kerry Washington. Norman Lear will be presented with the Carol Burnett Award, with tributes offered by Lin-Manuel Miranda, Wanda Sykes, and Marisa Tomei.

Are the Golden Globes on Netflix?

No, the Golden Globes are not streaming on Netflix.

Where are the Golden Globes streaming?

The NBC streaming service Peacock will host the Golden Globe Awards one day after its live broadcast. Peacock is a free streaming app, though subscribers can also opt to pay for premium versions that include more programming and ad-free streaming.

What time does the Golden Globes red carpet start?

When do the Golden Globes end?

The Golden Globes are scheduled to end at 11 p.m. ET/8 p.m. PT, so the entire ceremony should take roughly three hours barring any unforeseen technical issues.

Who is nominated for Golden Globes this year?

On the comedy side, Cohen is nominated again, this time in the Best Actor in a Comedy for “Borat Subsequent Moviefilm.” The Amazon comedy sequel is also nominated for Best Picture — Musical or Comedy and Best Actress in a Comedy for Maria Bakalova.

Of course, the Golden Globe Awards also reward the year’s top television series. This year, the Netflix show “The Crown” led all series with six nominations, including Best Drama Series, Best Actor in a Drama Series for Josh O’Connor, Best Actress in a Drama Series for Olivia Colman and Emma Corrin, and Best Supporting Actress for Gillian Anderson and Helena Bonham Carter.

Then, of course, there were some unexpected nominees: Ryan Murphy’s series “Ratched” landed three nominations including Best Drama Series, Best Actress in a Drama for Sarah Paulson, and Best Supporting Actress for Cynthia Nixon. Even more confounding were the nominations for the Netflix guilty pleasure “Emily in Paris.” The series scored a shocking nomination in the Best Musical or Comedy Series and star Lily Collins received a Best Actress in a Musical or Comedy Series nomination as well.  Here’s the full list of Golden Globes 2021 nominations.

Who will win the Golden Globes this year?

According to Gold Derby odds, Netflix film “The Trial of the Chicago 7” is expected to win Best Picture — Drama, Carey Mulligan should win Best Actress in a Drama for “Promising Young Woman,” Chadwick Boseman is the pick for Best Actor in a Drama for “Ma Rainey’s Black Bottom,” Amanda Seyfried is the choice for Best Supporting Actress for “Mank,” and Daniel Kaluuya should take home Best Supporting Actor for “Judas and the Black Messiah.”

First-time 'SNL' host Selena Gomez absolutely, positively does NOT have ants in her pants…