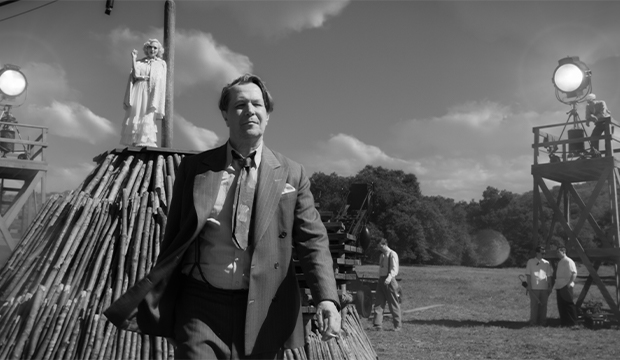 “Mank” led the way when the Golden Globe nominations for film were announced on Wednesday morning. It picked up six bids from the Hollywood Foreign Press Association: Best Film Drama, acting noms for Gary Oldman and Amanda Seyfried, citations for writing (Jack Fincher) and directing (David Fincher), and one last bid for its score by Trent Reznor and Atticus Ross. Check out the complete list of Golden Globe nominations here.

“The Trial of the Chicago 7” followed close behind with five nominations. The Netflix docudrama faces off against “Mank” in the top category in addition to a bid for supporting actor Sacha Baron Cohen, Aaron Sorkin for both Best Director and Best Screenplay, and Best Original Song for “Hear My Voice” by Daniel Pemberton and Celeste Waite. Sorkin is a Globes darling with seven previous writing nominations and two wins (for “The Social Network” and “Steve Jobs”), but this is his first recognition as a director from the HFPA.

Both “Mank” and “Chicago 7” are Netflix releases, and that streaming service dominated the film field. It received 22 motion picture nominations, followed by Amazon, which is a distant second with seven, and a trio of studios with five apiece: Focus Features, Searchlight Pictures, Sony Pictures Classics and Disney.

The current Oscar frontrunner for Best Picture, “Nomadland,” is nominated four times: Best Drama Film, Frances McDormand for Best Actress, and Chloe Zhao for Best Director and Best Screenplay. “Promising Young Woman” also got four nominations, exceeding our expectations. We were predicting Carey Mulligan to receive a nom, but the movie is also up for Best Film Drama, and Emerald Fennell contends for directing and writing.

If Zhao, King or Fennell wins the directing prize, they’d be only the second woman to win that award following Barbra Streisand for “Yentl” (1983). As it stands they’re the first women even to be nominated since Ava DuVernay for “Selma” (2014). This is the first time three women have been nominated in the category in the same year.

Rounding out the top five films is “The Father,” nominated for Best Film Drama, Best Drama Actor (Anthony Hopkins), Best Supporting Actress (Olivia Colman) and Best Screenplay (Florian Zeller and Christopher Hampton). Completely missing from the nominations were films like “Da 5 Bloods,” “Malcolm and Marie,” and indie darlings “First Cow” and “Never Rarely Sometimes Always.” What did you think of the nominations?