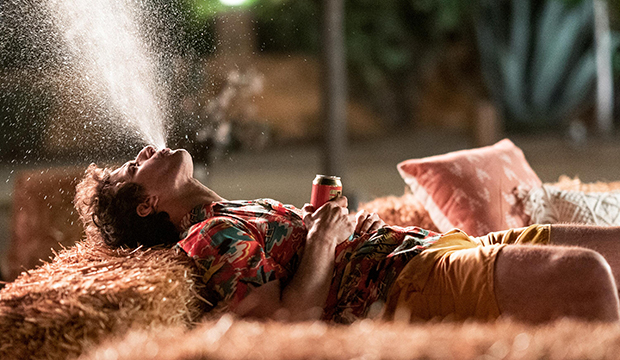 Andy Samberg is back! Seven years after winning a Golden Globe for “Brooklyn Nine-Nine,” the actor has scored his second career acting nomination. When he won in 2014, he said backstage, “I’m completely in shock. I just assumed I would come here and have a drink.” This time, he competes in the Best Film Comedy/Musical Actor category for his performance in “Palm Springs.” Samberg has been ignored by the Globes for previous films such as “Celeste and Jesse Forever” (2012) and “Popstar: Never Stop Stopping” (2016). It’s nice to see that the Hollywood Foreign Press Association is finally acknowledging his feature work. Could this time-bending comedy create a case of déjà vu for Samberg with another Globe upset?

Samberg faces off against Sacha Baron Cohen (“Borat Subsequent Moviegilm”), James Corden (“The Prom”), Lin-Manuel Miranda (“Hamilton”) and Dev Patel (“The Personal History of David Copperfield”). Of this group, Baron Cohen won this category before for the original “Borat” (2006). Miranda was nominated in this category for “Mary Poppins” (2018).

In “Palm Springs,” Samberg plays a wedding guest who has to live the same day again and again. When a bridesmaid (Cristin Milioti) gets stuck in the same loop, they develop a friendship as they adjust to their circular fate. This rom-com balances an absurd premise alongside quirky realism. The actor spoke to Gold Derby about how the sci-fi comedy spoke to universal themes in November. “A lot of these characters are dealing with facing themselves, facing their own pain and learning to be at peace with their own lot in life,” he said. “I think it is something we all struggle with.”

Perhaps the biggest hurdle is that Samberg will be competing against the two iconic performances of Borat and Hamilton, with the former being a past winner in the category. Globes voters often are conscious of grabbing headlines. However, Samberg offers something original, not to mention a character that hasn’t been awarded a Globe or Tony before. It’s a less tired performance and we know Globe voters love to go with something new.