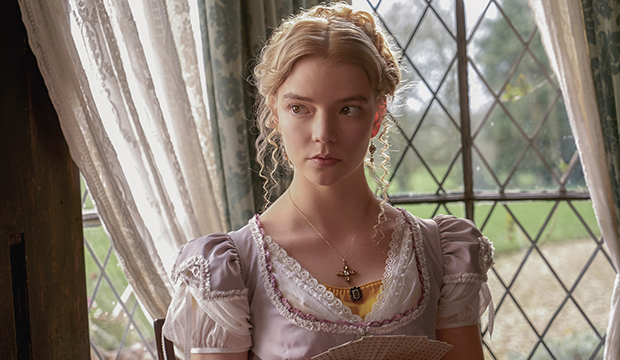 It has been a busy year for Anya Taylor-Joy. Just before the global pandemic shuttered movie houses, she starred in the new adaptation of Jane Austen’s “Emma” to rapturous praise. Later in the year, her limited series “The Queen’s Gambit” would become the most watched title on Netflix. The actress scored double Golden Globe nominations for these projects, but her Best Film Comedy/Musical Actress bid for “Emma” feels like the classic recipe for Golden Globe success.

The actress looks right at home in the vibrant Regency setting of “Emma,” playing the titular meddling Emma Woodhouse. Director Autumn de Wilde gives the classic novel a colorful update, and the success of the story rests on Taylor-Joy’s ability to win over the audience. She expertly charts Emma’s journey from self-centered matchmaker to a woman of compassion and empathy.

Taylor-Joy’s star has been on the rise since her breakout performance in Robert Eggers‘ “The Witch” in 2015. That film earned her a slew of critics’ prizes, but this year, with double Golden Globe nominations, truly feels like her coming out party. A banner year such as this one could be a major boost to her awards chances.

Other stars have earned two acting nominations in a single year and gone on to win one of their bids. Julianne Moore was nominated for her 2014 double “Maps to the Stars” and “Still Alice,” winning for the latter film. Meryl Streep pulled off two nominations in Best Film Comedy/Musical Actress for “It’s Complicated” and “Julie and Julia” 11 years ago; she won for her Julia Childs recreation. And then of course there is Kate Winslet, who bested everyone by winning two Globes in one night for her 2008 films “The Reader” and “Revolutionary Road.”

Taylor-Joy has fierce competition for the trophy, however. Bakalova has been scooping up critics’ awards left and right (though usually in a supporting actress category) and Pfeiffer is an acting legend. But the Globes love to anoint a new young star with a win. Taylor-Joy’s ability to lead a sprawling cast in a delightful period piece seems like perfect bait for the Hollywood Foreign Press Association. And since “Emma” was one of the last films seen in cinemas before the pandemic, voters might associate Taylor-Joy’s performance with happy memories of filmgoing.