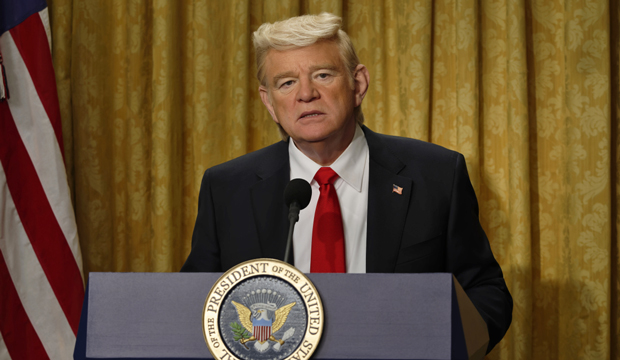 Irish actor Brendan Gleeson scored his fourth career Golden Globe nomination this year for his performance as Donald Trump in Showtime’s “The Comedy Rule.” His previous nominations were in the Best Film Comedy/Musical Actor category for “In Bruges” (2008) and “The Guard” (2011), and in the Best TV Movie/Limited Actor category for playing another instantly recognizable world leader, Winston Churchill, in the 2009 telefilm “Into the Storm.”

Emmy winner Gleeson is chilling as the scheming and impulsive presidential candidate turned president-elect in “The Comey Rule.” He co-stars with another Emmy champ, Jeff Daniels, who plays FBI Director James Comey in the two-part event series that tells the story of two powerful men whose strikingly different ethics and loyalties put them on a collision course. Based on Comey’s tell-all book “A Higher Loyalty,” which was adapted by writer and director Billy Ray (“Captain Phillips” and “Richard Jewell”), the political drama is a riveting exposé on the controversial role played by Comey and the FBI in shaping the events that led up to Trump’s surprise election victory and Comey’s ultimate firing.

Gleeson competes against John Boyega (“Small Axe”) and fellow Emmy winners Dan Levy (“Schitt’s Creek”), Jim Parsons (“Hollywood”) and Donald Sutherland (“The Undoing”) in Best TV Supporting Actor. Of this group, Boyega and Levy are first-time nominees, while Parsons scored his fourth career nomination to date (winning on his first for “The Big Bang Theory” in 2011). Globe veteran Sutherland has an impressive nine Globe nominations, winning twice, for “Citizen X” in 1996 and “Path to War” in 2003.

The Globes often award actors who play controversial real-life people in political series and TV films, particularly if they happen to be on the right-wing side of politics. The Hollywood Foreign Press Association might therefore embrace Gleeson this year just like they did for Russell Crowe last year for Showtime’s earlier political exposé, the Roger Ailes limited series “The Loudest Voice.” And seven years prior, the HFPA awarded Julianne Moore for her portrayal of proto-Trump vice presidential candidate Sarah Palin in HBO’s 2012 telefilm “Game Change.”

So while Gleeson is competing in the more competitive catch-all supporting category (where actors in TV movies, limited series, dramas and comedies are all grouped together), the foreign press might find it hard to resist handing the trophy to Gleeson for his uncanny performance as the notorious former president.