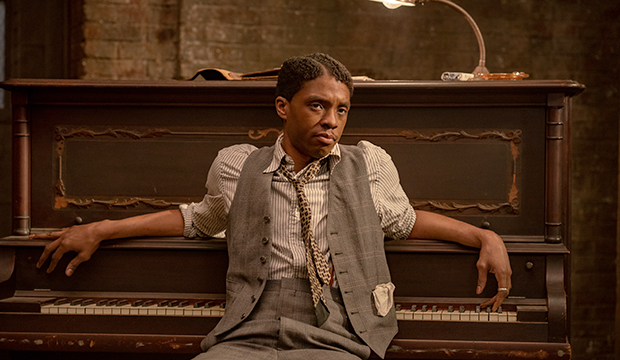 Last August, Chadwick Boseman lost his battle with cancer at age 43. The actor played only 12 characters during his short film career, but left behind a legacy of appreciable and complex representations of Black men. After stepping into the shoes of such real-life heroes as Jackie Robinson and Thurgood Marshall, he achieved his greatest success by portraying Marvel superhero Black Panther across four films. Although he did not garner much awards attention during his lifetime, his final role in Netflix’s “Ma Rainey’s Black Bottom” has brought him scads of honors, including his first Golden Globe bid.

Boseman is up for the Best Drama Actor against Riz Ahmed (“Sound of Metal”), Anthony Hopkins (“The Father”), Gary Oldman (“Mank”), and Tahar Rahim (“The Mauritanian”). Oldman is a past winner in the category for “Darkest Hour” (2017). Rahim is also first-timer at the Globes, while Ahmed has one previous nomination and Hopkins has seven.

In “Ma Rainey’s Black Bottom,” based on the stage play by August Wilson, Boseman plays Levee Green, a trumpet player in the titular blues singer’s band who has wild ambitions of his own. This combative character is a departure from the heroic ones he was best known for playing, but no less larger than life. The roles showcases more facets of his range than ever before as the musician experiences his greatest joy and deepest pain all in one fateful day.

Boseman’s costar, Viola Davis, is up for Best Drama Actress for her turn as Ma Rainey. She has been nominated a total of six times since 2009 and took home the Best Supporting Actress award for “Fences” in 2017. The film is one of 18 to earn at least two Golden Globe bids this year, matching the previous year’s total and falling just one short of the record set by the nominees of 1987.

Boseman joins Heath Ledger (“The Dark Knight”) as one of the only two posthumous film acting nominees in Golden Globes history, and the only one in any of the lead categories. Like Ledger’s, his nomination was heavily anticipated and is viewed as thoroughly deserved. The prestigious recognition alone is a fitting tribute to one of the most impactful stars of the past decade.