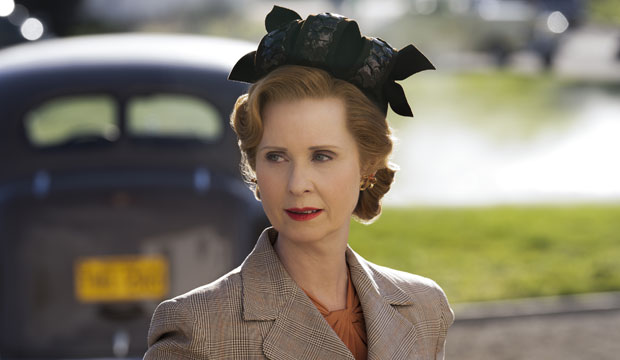 Fifteen years is a long time to wait between Golden Globe nominations. Not too many actresses have waited as long or longer, including Angela Lansbury, Helen Hunt, and Cynthia Nixon. Since 2006 Nixon has collected her second Emmy, a Grammy, and two Tonys, yet had not captured the attention of the HFPA. This year, however, the talented actress’s performance in the Netflix drama series “Ratched” has earned her a sixth shot at victory.

At these Golden Globes, Nixon faces off against Gillian Anderson (“The Crown”), Helena Bonham Carter (“The Crown”), Julia Garner (“Ozark”), and Annie Murphy (“Schitt’s Creek”) in the race for Best TV Supporting Actress. Garner and Murphy are both first-timers, while Anderson has amassed five previous bids and one win (Best TV Drama Actress, “The X-Files,” 1997). Bonham Carter has eight previous nominations to her name, including one last year for the same series, but she hasn’t won yet.

“Ratched” is set in 1947 and tells the origin story of notorious “One Flew Over the Cuckoo’s Nest” villain Nurse Mildred Ratched. So far, all other characters in the series are original creations, including Ratched’s love interest, gubernatorial campaign manager Gwendolyn Briggs. Nixon infuses Briggs with a compassionate warmth that gradually melts the titular nurse’s cold heart but also clouds her shrewd judgment. As the season progresses, she plays an instrumental part in humanizing a character who is mostly remembered as an unfeeling monster.

The show is up for a total of three Golden Globes this year, including Best Drama Series and Best TV Drama Actress (Sarah Paulson). Nixon’s nomination was the most unexpected of the three, but her being included demonstrates a clear love for the series among Globes voters that may translate to a victory here, followed by Emmy recognition this summer.

Nixon has competed in this category four times already. Her portrayal of Miranda Hobbes in the HBO comedy series “Sex and the City” earned her nominations in 2000, 2001, 2003 and 2004. In 2006 she earned an additional bid for her lead role as Eleanor Roosevelt in the TV film “Warm Springs.” Now on her sixth outing, she is one of the 30 most-nominated TV actresses in Golden Globes history. But will she finally win?