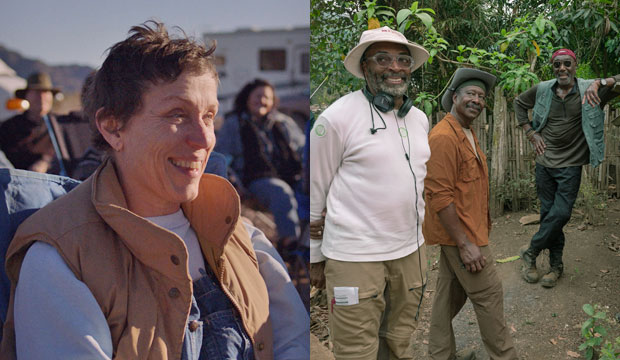 In terms of inclusion, there was a lot to celebrate when the 2021 Golden Globe nominations were announced, especially the fact that most of the Best Director nominees are women for the first time in history. There were also a number of women and BIPOC recognized for their work in front of and behind the camera. Though the Best Picture categories feature mostly white protagonists.

Out of the combined 10 nominees for Best Film Drama and Best Film Comedy/Musical, only one of them centers actors of color: “Hamilton,” the filmed version of the Tony-winning musical that streamed on Disney+ last year. Other films with non-white characters at their center that we thought might be top contenders were left out of those two top races, including “Ma Rainey’s Black Bottom,” “One Night in Miami,” “Judas and the Black Messiah,” “On the Rocks” and “Da 5 Bloods,” the last of which didn’t get any nominations at all.

SEE2021 TV Golden Globe Nominations: Which Networks, Streamers and Shows Got The Most?

The Hollywood Foreign Press Association expanded their reach in the foreign-language and animated field, where BIPOC characters lead the films “Over the Moon,” “Soul,” “The Life Ahead,” “La Llorona” and “Minari.” A couple other animated nominees don’t exactly fit into modern ethnic categories: “The Croods: A New Age” is about prehistoric humans, and “Onward” is about elves, but both films feature white actors voicing their lead roles.

So a couple of Best Film races are pretty conspicuous, but there’s good news for a number of other underrepresented groups. In the four Best Film races, 11 of the 20 nominees have female leads or co-leads: dramas “Nomadland” and “Promising Young Woman”; comedy/musicals “Music,” “Palm Springs” and “The Prom”; foreign films “The Life Ahead,” “La Llorona” and “Minari”; and animated movies “The Croods,” “Over the Moon” and “Wolfwalkers.”

Out of the unprecedented three female nominees for Best Director, two are women of color (Regina King for “One Night in Miami” and Chloe Zhao for “Nomadland”). And the acting categories represent a wide array of identities, including contenders of Asian (Dev Patel in “The Personal History of David Copperfield” and Riz Ahmed in “Sound of Metal”), Algerian (Tahar Rahim in “The Mauritanian”), Latinx (Lin-Manuel Miranda in “Hamilton”) and African -American descent (along with actors from “Ma Rainey” and “One Night in Miami,” there’s Andra Day in “The United States vs. Billie Holiday” and Daniel Kaluuya in “Judas and the Black Messiah”).

So it wasn’t a total whitewash as we’ve seen at award shows in the past — far from it. In terms of the films that got made in 2020 and the often marginalized individuals who got to make them and be recognized for them, I’d say this Golden Globes glass is half-full.