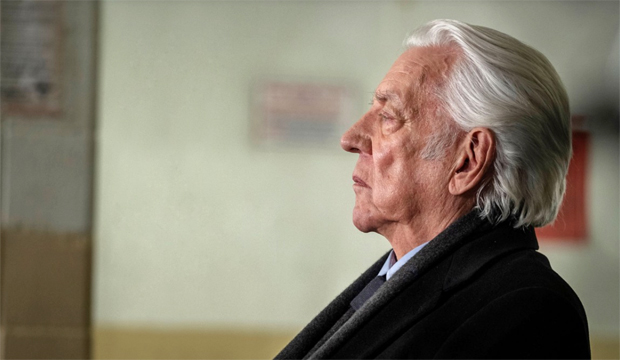 It has been exactly 50 years since Donald Sutherland earned his first Golden Globe nomination, and the tireless actor has marked the occasion by garnering yet another one. His bid for the HBO miniseries “The Undoing” is his ninth overall and, at age 85, he stands out as this year’s oldest nominee in any acting category. Though it has been 13 years since the HFPA last recognized him, he has remained remarkably active and has now proven to be as serious a contender as ever.

At the upcoming Golden Globes, Sutherland faces off against John Boyega (“Small Axe”), Brendan Gleeson (“The Comey Rule”), Dan Levy (“Schitt’s Creek”) and Jim Parsons (“Hollywood”) in the race for Best TV Supporting Actor. Boyega and Levy are both first-timers, while Gleeson and Parsons have each earned three previous nominations. Parsons took home the Best TV Comedy Actor award in 2011 for “The Big Bang Theory.”

“The Undoing” follows an affluent couple (Nicole Kidman and Hugh Grant) whose marriage and lives are torn asunder following the murder of a mysterious young woman. Sutherland plays the role of Kidman’s father for the second time in their careers, the first being in the 2003 feature film “Cold Mountain.” As retired financier Franklin Reinhardt, he acts as his daughter’s fiercest protector and staunchest supporter in her time of greatest desperation.

Susanne Bier‘s six-episode miniseries is tied with the Netflix drama series “Ozark” as the third most-nominated TV program of the year. It is in the running for Best TV Movie/Miniseries and also nabbed bids for Kidman and Grant’s lead performances. Kidman has won four Golden Globes for a variety of film and TV roles, while Grant scored a win in 1995 for the film “Four Weddings and a Funeral.”

Sutherland has prevailed in this category twice before for his performances in the HBO films “Citizen X” (1996) and “Path to War” (2003). He earned two additional bids for his supporting roles in the drama series “Commander in Chief” (2006) and “Dirty Sexy Money” (2008). He also competed for Best TV Movie/Miniseries Actor for “Human Trafficking” (2006) and has three nominations on the film side for his lead roles in “MASH” (1971) and “Ordinary People” (1981) and his supporting one in “Without Limits” (1999). If he succeeds on this outing, he will tie Ed Asner and Laura Dern’s record for most Golden Globe wins in any supporting category, including feature films.