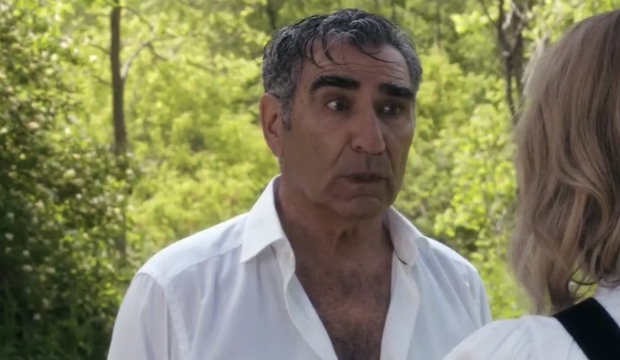 “Schitt’s Creek” swept the Primetime Emmys for the show’s farewell season. Series star and co-creator Eugene Levy scored two wins for Comedy Series and Comedy Actor as part of the awards haul. So it may come as a surprise to many that Levy’s recent Golden Globe nomination for Comedy/Musical Actor is his first ever mention from the Hollywood Foreign Press Association. Can the veteran performer continue his winning streak for playing Johnny Rose?

At the upcoming Golden Globes, Levy is nominated for Comedy/Musical Actor alongside Don Cheadle (“Black Monday”), Nicholas Hoult (“The Great”), Jason Sudeikis (“Ted Lasso”) and Ramy Youssef (“Ramy”). Holt and Sudeikis are also first-time Globe nominees, while Cheadle and Youssef are both past winners.

Levy has a legendary career of playing heightened, wacky characters across film and television. But the actor chose to play things straight with Johnny, the patriarch of the Rose family on “Schitt’s Creek.” That change of pace has resulted in more awards attention than any of the other iconic roles in Levy’s career. The final season saw Johnny turn the lessons he learned from small town living into his newest business venture: a chain of charming “Rosebud Motels.”

When it comes to television awards, Globe voters detest being told what to do by their big sister Emmy. So the “Schitt’s Creek” Emmy sweep could actually make Levy vulnerable at the Globes where voters might opt for a fresh faced winner like Sudeikis or Hoult. Still, “Schitt’s Creek” dominated the zeitgeist this past year in a way that most shows can only dream of. The HFPA won’t want the series to go home empty handed as they’ve never nominated it at all until now.

There is precedent for a last minute hug from the Golden Globes. “Breaking Bad” was continually skunked at the Globes for years despite cleaning up at the Emmys. Globe voters finally jumped on board for the final season, where it won Drama Series and Drama Actor for Bryan Cranston. Since Levy is a producer of “Schitt’s Creek,” he has the opportunity to win Comedy/Musical Series in addition to an acting trophy. Time will tell if Levy can replicate Cranston’s goodbye hug at the Globes.