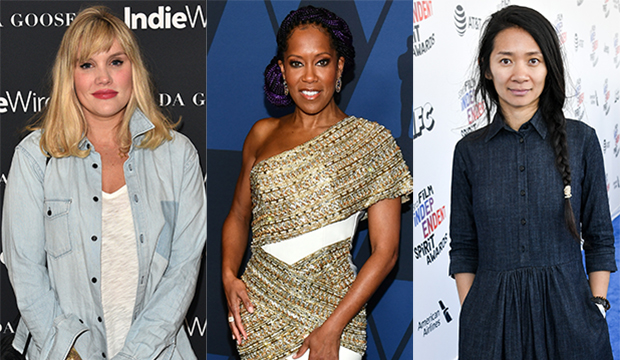 The Golden Globes nearly doubled their number of female Best Director nominees in one fell sweep with Wednesday’s nominations. Emerald Fennell (“Promising Young Woman”), Regina King (“One Night in Miami”) and Chloe Zhao (“Nomadland”) all made the cut, becoming the sixth, seventh and eighth women to be nominated in the category. This is the first time multiple women have been nominated in a single year.

They are joined by former winner David Fincher (“Mank”) and first-time directing nominee Aaron Sorkin (“The Trial of the Chicago 7”).

The HFPA has come under fire the past few years for overlooking female helmers, most memorably when Natalie Portman dragged the group hard by saying, “And here are the all-male nominees” in 2018 when presenting the category. Last year, despite a bevy of female-directed films in the mix, including Greta Gerwig‘s “Little Women,” Lulu Wang‘s “The Farewell” and Marielle Heller‘s “A Beautiful Day in the Neighborhood,” the lineup was once again all men.

Fennell’s and Zhao’s films are are also up for the top drama prize — in fact, their movies are competing in the same four categories, the others being Best Drama Actress (for Carey Mulligan and Frances McDormand, respectively) and Best Screenplay. “One Night in Miami” netted two other nomination in supporting actor for Leslie Odom Jr. and in original song for “Speak Now,” co-written by Odom.