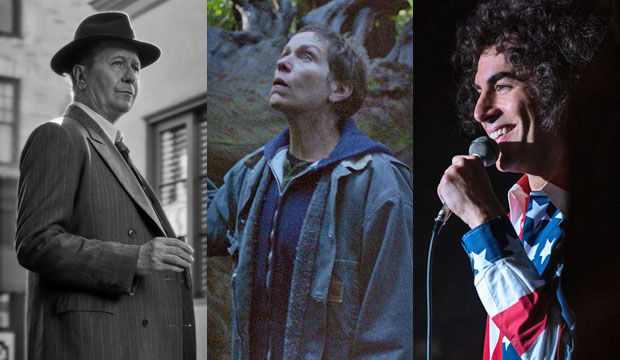 Expect a good morning for “Mank,” “The Trial of the Chicago 7,” “Nomadland” and “One Night in Miami” when the Golden Globe nominations are announced on Wednesday, February 3. We’re betting on them to be among the top nominees when the Hollywood Foreign Press Association reveals their picks. That’s according to the combined predictions of thousands of Gold Derby users who have placed their bets here in our predictions center. Scroll down for our nomination forecasts listed by film, with our projected winners highlighted in gold.

Our users are anticipating a windfall of five nominations for “Mank,” including Best Film Drama, acting bids for Gary Oldman and Amanda Seyfried (whom we think will win Best Film Supporting Actress), and coveted noms for writing (Jack Fincher) and directing (David Fincher). But we’re not predicting all Golden Globe film categories. Best Score, Best Song and Best Foreign Language Film are not in our predictions center, and the “Mank” score by Trent Reznor and Atticus Ross is certainly a strong contender, potentially bringing the biographical film up to six bids.

We’re also betting on “Chicago 7” five times: Best Film Drama, supporting nominations for Sacha Baron Cohen and Mark Rylance, and writing and directing bids for Aaron Sorkin. Not far behind is the film we’re predicting will win Best Film Drama: “Nomadland,” which is forecast in four categories. In addition to the top prize, it’s a likely nominee for Frances McDormand‘s lead performance as well as Chloe Zhao‘s writing and directing. Zhao is tipped to win the directing prize, which would make her the first female directing champ at the Globes since Barbra Streisand prevailed for “Yentl” (1983).

Also forecast in four categories is “One Night in Miami,” which is favored for noms for Best Film Drama, Leslie Odom Jr.‘s supporting performance, Regina King‘s direction and Kemp Powers‘s script (adapted from his own stage play). Odom could additionally be nominated for an original song he co-wrote for the film, “Speak Now,” and he could grab a third nom for the Disney+ filmed version of the musical “Hamilton,” for which Odom won a Tony.

See what other films and performances we’re predicting below. Who are you most rooting for? Are there any films you think we’re criminally underestimating? There’s still time to make or update your own predictions here before the nominations are announced.

SEEKaley Cuoco takes flight! ‘The Flight Attendant’ star could win at the Golden Globes, but what about the SAG Awards?

“OVER THE MOON”
Best Animated Feature