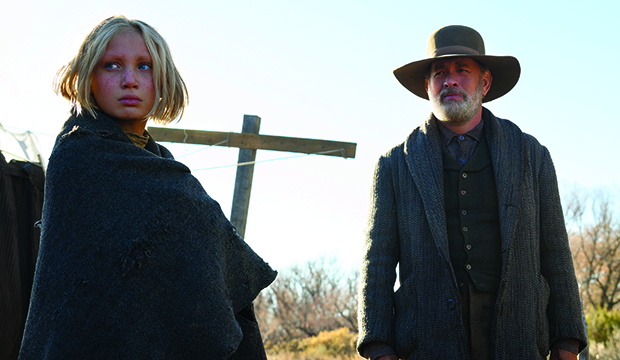 At 12 years old, Helena Zengel has become one of the youngest Golden Globe nominees in history for her supporting role in “News of the World” opposite Tom Hanks. The Universal Pictures film is directed by Paul Greengrass, who knew Zengel would be perfect for the role of Johanna Leonberger after seeing her breakout performance in the 2019 German film “System Crasher.”

Set five years after the Civil War, Hanks plays Captain Jefferson Kyle Kidd, a war veteran and widower who travels from town to town as a non-fiction storyteller. While passing through Texas, he crosses paths with Johanna, a 10-year old orphan taken in by the Kiowa people six years earlier and raised as one of their own. After their volatile first encounter, Kidd ultimately agrees to return the young girl to her living relatives residing hundreds of miles away. During their journey, the pair must learn to communicate as they face challenges from both human and natural forces.

Zengel will face off against Glenn Close (“Hillbilly Elegy”), Oliva Colman (“The Father’), Jodie Foster (“The Mauritanian”) and Amanda Seyfried (“Mank”) for Best Film Supporting Actress. While both Zengel and Seyfried are first-time nominees, their three veteran competitors have all been recognized by the Hollywood Foreign Press Association before.

In addition to her Golden Globe nomination, Zengel has been nominated for a Screen Actors Guild Award and was longlisted for consideration at the upcoming BAFTAs. Her performance in “News of the World” has earned high praise from critics, including Brian Truitt (USA Today), who writes, “Zengel holds her own with a Hollywood icon by imbuing her character with a wild-child manner that ultimately cracks to show the innocence underneath.” A victory at the Golden Globes would make Zengel the youngest actor to win in any acting category across film and TV. At age 9, Ricky Schroeder became the youngest winner overall when he prevailed in 1980 for New Star of the Year, a category that no longer exists.