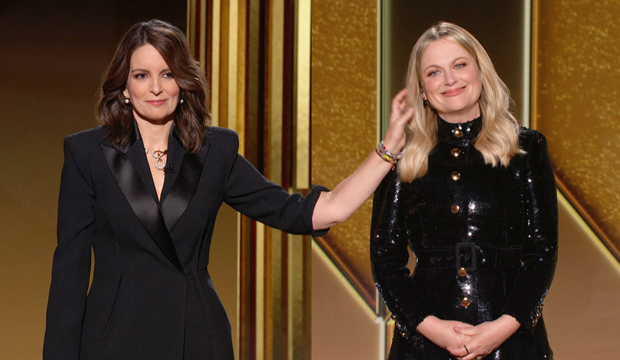 Golden Globe viewers have spoken, and they say Tina Fey and Amy Poehler were “truly amazing” as hosts of NBC’s bicoastal 2021 ceremony. These funny ladies are no strangers to emceeing one of Hollywood’s biggest nights as they also oversaw the 2013, ’14 and ’15 events, but this time around they had the added pressure of the coronavirus pandemic. Due to Covid-19, Fey beamed in from New York’s Rainbow Room at Rockefeller Center while Poehler entertained from Los Angeles’ Beverly Hilton Ballroom.

So how’d they do as hosts of the 78th annual edition of these kudos? Let’s take a closer look at our readers’ Golden Globes hosts poll results:

When the duo agreed to host this event over a year ago, nobody could have predicted the world would be under siege by a killer virus. But the show, as always, must go on, and so the Hollywood Foreign Press Association decided to broadcast from two different locations for the first time ever. Presenters appeared live at both venues, while winners in TV and film accepted their trophies virtually from their own homes around the world. (See the complete Golden Globes winners list.)

During their bicoastal monologue (watch below), the former “Saturday Night Live” actresses poked fun at the pandemic. “I’m Tina Fey coming to you from the beautiful Rainbow Room in New York City, where indoor dining and outdoor muggings are back,” Fey said at the start of the show.

Poehler quipped, “Yes! And I am Amy Poehler here at the Beverly Hilton District 7 New Angeles, and this is the 78th annual Hunger Games.” She later promised that the technology was “so great” people at home wouldn’t be able to tell that they were in two different cities. Cue a cheeky bit where Fey reaches through the camera and gently pets Poehler’s hair.

Both actresses have gone through the elation of winning a coveted statuette, with Fey taking home three Golden Globes for “30 Rock” (two for acting, one for producing) and Poehler claiming one for “Parks and Recreation.” Poehler’s victory actually came while she was hosting the 2014 ceremony. “I’ve never won anything like this!” she exclaimed when she took the stage, this time as a winner.

In the years since their last time serving as Globes ringleaders, the HFPA tried out several different types of hosts, all with varying degrees of success. They went with late night stars (Jimmy Fallon in 2017, Seth Meyers in 2018), an out-of-the-box duo (Andy Samberg & Sandra Oh in 2019) and a reliable comedian (Ricky Gervais, whose five at-bats were in 2010, ’11, ’12, ’16 and ’20).