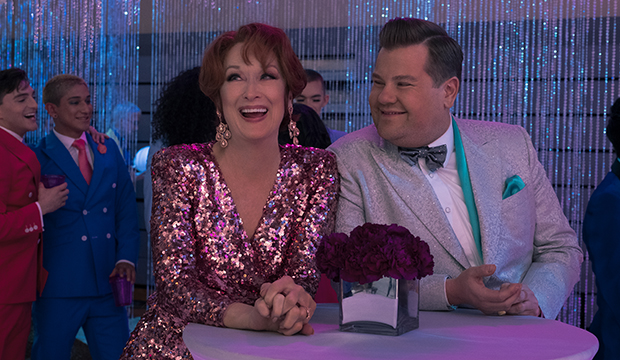 Many people may only know James Corden as that British guy who hosts “The Late Late Show with James Corden” or “Carpool Karaoke.” However, the Emmy and Tony winner has a long history on stage, screen and television. This year, Corden has earned his first Golden Globe nomination for his work on Netflix’s “The Prom,” which is also nominated for Best Musical/Comedy Film.

Corden’s competition for Best Musical/Comedy Actor includes Sacha Baron Cohen (“Borat Subsequent Moviefilm”), Lin-Manuel Miranda (“Hamilton”), Dev Patel (The Personal History of David Copperfield”) and Andy Samberg (“Palm Springs”). Corden is the sole first-time nominee, while Miranda and Patel are looking for their first wins. Samberg previously won on the television side for “Brooklyn Nine-Nine,” and Baron Cohen is looking for his second win, having triumphed in this category in 2006 for playing the same character in the first “Borat” film.

In “The Prom,” Corden plays Barry Glickman, an egotistical actor desperate for some good publicity following his latest Broadway flop. To that end, he joins his friend and equally narcissistic co-star Dee Dee (Meryl Streep) as they try to help a young Indiana girl who has been banned from her prom because of her sexuality. The film is adapted from the 2018 Broadway musical of the same name, which earned seven Tony nominations, including for Brooks Ashmanskas, who originated role of Barry.

Corden’s work on television has earned him a whopping 10 Emmys within just the last five years. Those awards span not only his work on his late-night show and “Carpool Karaoke,” but also his role as host and producer of the 70th Tony Awards. Prior to his work on television, Corden was famous for his stage roles in “The History Boys” and “One Man, Two Guvnors,” the latter of which earned him the Tony Award for Best Actor in a Play in 2012.

Corden is the sole acting nominee from “The Prom,” which could play to his advantage. Corden’s co-stars include Globe faves Nicole Kidman and Kerry Washington. And then there’s Meryl Streep, the current Globe record holder for the most acting nominations (32) and the most wins (8). The fact that Corden beat out such awards favorites could reflect a certain amount of support from Globe voters. Will it be enough to get him his first win?