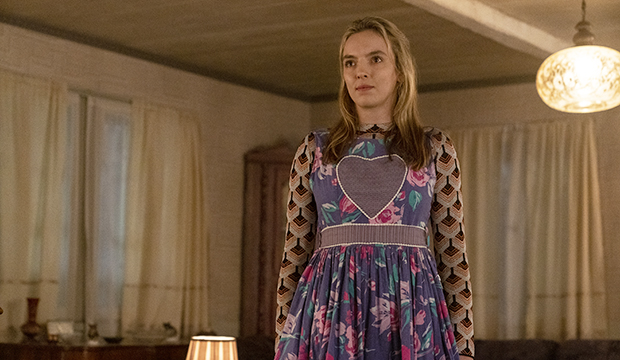 This year Jodie Comer received her second consecutive Golden Globe Award nomination in the Best TV Drama Actress category for playing the assassin Oksana “Villanelle” Astankova in “Killing Eve” on BBC America. The Emmys nominated this Comer performance last summer, but she lost to Zendaya, the “Euphoria” star who wasn’t eligible for these Globes since “Euphoria” aired its season back in 2019. Comer contends here for “Eve’s” third season, even though the show missed a Best TV Drama Series nomination for the first time. Co-star Sandra Oh won Best Drama Actress for the first season, then the Globes swapped her out last year for Comer, who lost to Olivia Colman for “The Crown.” Can Comer collect the trophy this time?

Colman looks to defend her crown, this time against her new co-star Emma Corrin in the category. The other nominees are past Globe winners Laura Linney and Sarah Paulson, who compete now for “Ozark” and “Ratched,” respectively. Comer likely will be ineligible for “Killing Eve” next year, as the global pandemic has prevented the start of production on the fourth season of the spy thriller, which shoots on location across an array of European countries. Comer is filming a new drama titled “Help” in the meantime. That show is set in England during the outset of the pandemic and represents Comer’s first credit as an executive producer.

Comer also has the lead female role in two films that have been reshuffled amid the pandemic to release in 2021, both previously having been scheduled for 2020. She plays a video game developer in Shawn Levy‘s “Free Guy” starring Ryan Reynolds and a 14th-century Frenchwoman in Ridley Scott‘s “The Last Duel” starring Matt Damon. Comer’s only prior appearances in theatrical releases have been small roles in “England is Mine” in 2017 and “Star Wars: The Rise of Skywalker” in 2019. So it looks like she may have opportunities for recognition in the near future even if we have to wait awhile for more “Eve.”