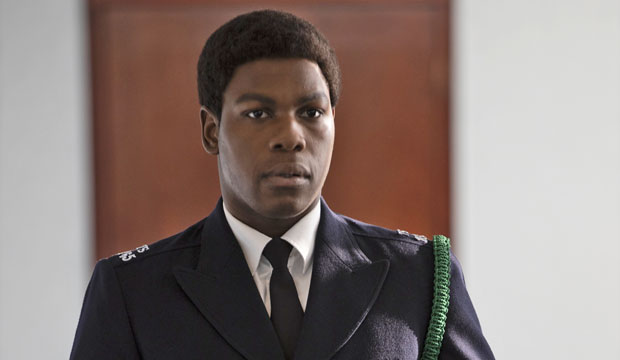 John Boyega is best known around the world for his role as Finn, the plucky former stormtrooper in Disney’s new “Star Wars” trilogy. However, his performance in Steve McQueen’s “Small Axe” anthology is a completely different beast, and now that Boyega has left the galaxy far, far away he has chosen a significantly more grounded, real-life role and earned his first Golden Globe nomination, and likely his first win.

Boyega faces an eclectic group of competitors in the TV Supporting Actor category. His fellow nominees at this year’s Globes are Dan Levy (“Schitt’s Creek”), Brendan Gleeson (“The Comey Rule”), Jim Parsons (“Hollywood”) and Donald Sutherland (“The Undoing”). Levy is the only other first-time nominee, hot off his record setting wins at the Emmys. Sutherland has nine bids and two wins, Parsons has four noms with one win, and Gleeson has four nominations.

Amazon’s “Small Axe” is a series of films focusing on the life of West Indian immigrants in London between the 1960s and 1980s. Boyega stars in the third episode of the anthology, “Red, White, and Blue,” playing Leroy Logan, a real-life black London police officer who attempted to reform the racist institution from within. Boyega’s performance hearkens back to his breakout role as a kid in the projects fighting aliens in “Attack the Block,” and his portrayal of a security guard caught up in a police riot in Katherine Bigelow’s “Detroit.” As in those films, Boyega proves exceptionally adept at playing regular working-class people. His Leroy Logan feels less like the hero of a movie, and more like a real person just trying to do the right thing and struggling to make a tiny bit of difference. He fits perfectly in McQueen’s naturalistic portrayal of London’s majority black neighborhoods.

McQueen’s powerful anthology of films has received deserved critical acclaim, with some arguing it should be treated as a film and not as a TV series. The Los Angeles Film Critics Association even named the whole series their best film of the year. At the Globes however, “Axe” is treated as a limited series; aside from Boyega’s nomination in the Best TV Supporting Actor category, the anthology itself is nominated for Best TV Movie/Limited Series. Questions of how to best classify it aside, it’s clear that “Small Axe” deserves to be awarded in some way, and chances are good that it will be.

Due to his recent Emmy win, Levy seems to be Boyega’s primary competition. However, if Globes voters don’t want to feel beholden to the decisions of Emmy voters, Boyega is a strong alternative. “Small Axe” is fresh and has received almost universally positive reviews; it would not be a surprise if it wins both of the awards it is nominated for.