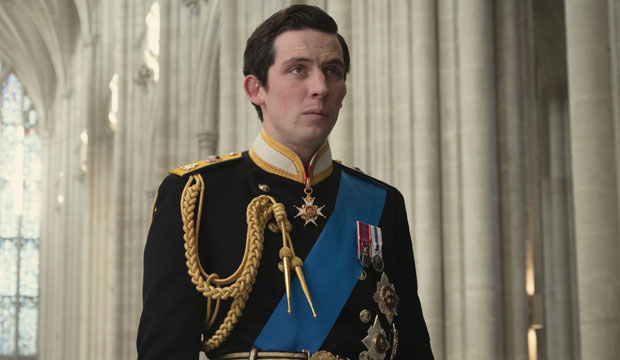 Josh O’Connor scored his first Golden Globe nomination this year for playing Prince Charles on “The Crown.” Netflix changed its awards strategy for the show’s acclaimed fourth season by swapping its chief male actors, as Tobias Menzies as Prince Philip was submitted as a supporting actor, with O’Connor taking his place in the lead race. It paid off for O’Connor, who was snubbed last year when he was submitted in the crowded catch-all supporting category.

Granted, he only appeared in four of last season’s 10 episodes, whereas this season, the actor appeared in nine of the 10, as the Prince of Wales is at the center of the action alongside Princess Diana (fellow Globe nominee Emma Corrin).

O’Connor is nominated in the Best TV Drama Actor category alongside Emmy winners Jason Bateman (“Ozark”), Bob Odenkirk (“Better Call Saul”) and Matthew Rhys (“Perry Mason”), as well as Oscar and Emmy-winning legend Al Pacino (“Hunters”). Of this group, O’Connor is the sole newbie up against four Globe favorites. Bateman has five nominations to date, winning on his first go for “Arrested Development” in 2005. Odenkirk has four Globe nominations and Rhys has three, while Pacino has a staggering 18 Globe nominations, winning four (for “Serpico” in 1974, “Scent of a Woman” in 1993, “Angels in America” in 2004 and “You Don’t Know Jack” in 2011), not to mention he also received the HFPA’s prestigious Cecil B. DeMille Award in 2001.

SEE Prepare yourselves for another ‘Crown’ coronation at the Golden Globes

Can O’Connor actually triumph against such heavyweights? The HFPA has already awarded two actors from “The Crown,” and they both played the Queen: Foy for the first season and Colman for the third. But the show is not invincible, as John Lithgow, who won a truckload of awards for playing British PM Winston Churchill in the show’s first season, lost the Globe to Hugh Laurie for “The Night Manager” four years ago.

However, ‘The Crown” seems to be on a roll everywhere you look this year. It has six Globe noms this year for Best Drama Series, lead actresses Colman and Corrin, lead actor O’Connor and supporting actresses Anderson and Bonham Carter. That’s up from three nominations in 2017, two in 2018 and four last year, and makes it the most nominated TV program this year.

If that trend holds true, then this might be a race between Bateman and O’Connor. The safe bet might ultimately be newbie O’Connor, though, as “Ozark” trails “The Crown” with four nominations, which admittedly is way up from a single nomination for each of its previous two seasons (for Bateman both times). But “Ozark” has never won a Globe, perhaps indicating less support among the foreign press. So there’s a strong chance the prince will reign.