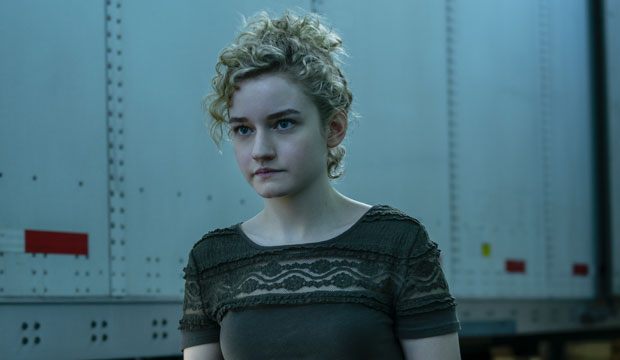 In “Ozark’s” season three finale, Julia Garner‘s character Ruth Langmore tells the Byrdes that she’s “f***ing done.” But at the Golden Globes, the actress is just getting started. After missing out for the Netflix drama’s first two seasons, she has finally landed her maiden nomination for her searing turn as firecracker Ruth in the catch-all Best TV Supporting Actress category.

In her category, Garner is up against Gillian Anderson (“The Crown”), Helena Bonham Carter (“The Crown”), Annie Murphy (“Schitt’s Creek”) and Cynthia Nixon (“Ratched”). Of this group, Anderson is the only previous winner, having snagged the Drama Actress trophy for “The X-Files” in 1997. Carter, who was also nominated for “The Crown” last year, now has nine bids, while Nixon has six bids, but neither has a win under her belt. And Murphy joins Garner as the only other first-timer in the category.

After a calamitous second season for her, “Ozark’s” third sees Ruth back on her feet, co-managing the Missouri Belle’s casino operations alongside Marty (Jason Bateman) and finding a love interest in Wendy’s (Laura Linney) brother Ben (Tom Pelphrey). It’s not long, however, before matters take a dramatic turn: not only does Ruth land in the hospital after she’s beaten up by Frank Cosgrave Jr. (Joseph Sikora), but Ben tragically bites the dust after he gets too wrapped up in the Byrdes’ affairs. This leads a grief-stricken, enraged Ruth to break ties with the Byrdes at the end of the season.

For “Ozark,” Garner scooped up back-to-back Emmys for Best Drama Supporting Actress in 2019 and 2020, the latter of which recognized her work in season three. Thus, the Hollywood Foreign Press Association can’t earn bragging rights for being the first group to throw its support behind the actress, but it can make sure it isn’t the last to do so. Garner is also nominated at the Critics Choice and Screen Actors Guild Awards, both of which air after the Globes and likewise have not yet awarded the actress for this show or in her career altogether.

Before this year “Ozark” maxed out at the Globes with a pair of Best TV Drama Actor bids for Bateman (2018-19), but the show finally made a bigger dent this time around, also racking up mentions for Best Drama Series, Best Actor again for Bateman and Best Actress for Linney. This significant uptick in noms could be good news for Garner, who might be the perfect place for the HFPA to acknowledge the show. Not only is she the only “Ozark” cast member to have so far netted an acting Emmy, but she plays arguably the most popular character on the series. And let’s be honest, she deserves to snatch the gold just for her pitch-perfect delivery of “bitch wolf.”