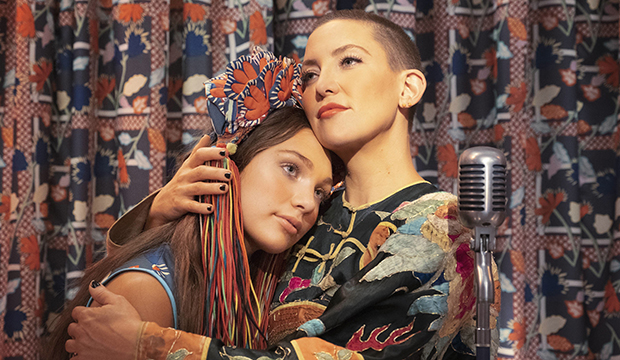 Kate Hudson scored her second career Golden Globe nomination for her performance as Zu in “Music,” the feature directorial debut from three-time Globe nominated and nine-time Grammy-nominated Australian singer-songwriter Sia. It’s been a long time between nominations for Hudson, who was was nominated and won for her supporting performance in Cameron Crowe‘s “Almost Famous” 20 years ago, for which she went on to earn an Oscar nomination.

In “Music,” Hudson plays a rebellious free spirit who is newly sober and estranged from her family. She finds herself the sole guardian of her teenage half-sister Music (Maddie Ziegler), who is on the autism spectrum. As she struggles with her new responsibility, Zu looks to her friend, neighbor Ebo (Leslie Odom Jr), for guidance and support. The film embarks on Zu’s journey self-discovery through Sia’s uplifting original songs and musical flights of fancy, which take place in striking, vibrant color inside Music’s imaginative mind. For her offbeat musical, Sia re-teamed with frequent collaborators Ziegler and Ryan Heffington, who starred in and choreographed, respectively, the performer’s music videos, including the Grammy-nominated “Chandelier” and “Cheap Thrills.” Hudson was cast in the film after the songstress noticed Hudson’s singing on social media, changing the title character’s gender so that Hudson could bring Zu to life. She now finds herself a Globe nominee for her brave and unconventional performance.

Hudson competes against Maria Bakalova (“Borat Subsequent Moviefilm”), Michelle Pfeiffer (“French Exit”), Rosamund Pike (“I Care a Lot”) and Anya Taylor-Joy (“Emma”) in Best Film Comedy/Musical Actress. Of this group, Bakalova is a first-time nominee alongside Taylor-Joy, who makes her Globes debut with two nominations with a bid on the TV side for “The Queen’s Gambit.” Pike has been twice nominated before (for 2018’s “A Private War” and 2014’s “Gone Girl”) and Globe veteran Pfeiffer has an impressive seven previous Globe nominations, winning once for “The Fabulous Baker Boys” in 1990.

This is Hudson’s first nomination for this role, which came as somewhat of a surprise, given the film was only released relatively recently (it opened stateside on Feb. 12) and has so far not shown up on the awards season radar. The Hollywood Foreign Press Association clearly loved her performance and the film, seeing that the group bestowed a Best Comedy/Musical Film nomination on the film as well, ahead of a number of a bunch of presumptive strong contenders. That double whammy puts Hudson in a strong position to continue surprising pundits as a potential shock winner if voters can’t resist the film’s message and Hudson’s fearless performance.