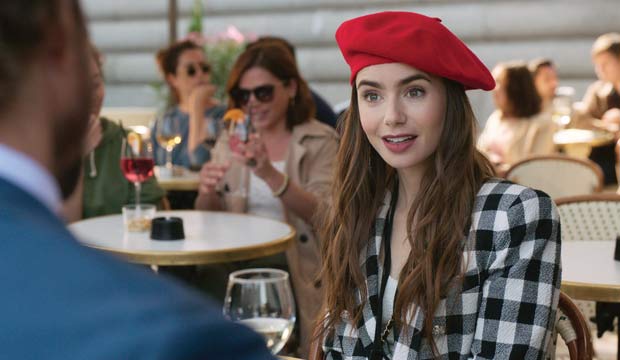 “Emily in Paris” became a big hit for Netflix when the first season dropped in October, thanks in part to the star turn at its center by Lily Collins. As the eponymous Emily, Collins is in full rom-com mode as a spirited young American woman adjusting to life in Paris and falling in love in the process. Viewers quickly binged “Emily in Paris” like devouring a box of macarons and turned it into an unexpected success, sustaining enough buzz to earn two Golden Globe nominations — one for Collins and another for the show in Best Comedy/Musical Series.

In the Best Comedy/Musical Actress category, Collins has some fierce competition that includes Kaley Cuoco (“The Flight Attendant”), Elle Fanning (“The Great”), Jane Levy (“Zoey’s Extraordinary Playlist”) and Catherine O’Hara (“Schitt’s Creek”). Collins is the only actress in this year’s category with previous Golden Globes history, earning a nomination on the film side for “Rules Don’t Apply” (2016).

Despite the light-hearted tone of “Emily in Paris,” Collins’s performance is harder to pull off than it looks. Emily is an ignorant American in Paris, moving to France for a job opportunity without knowing the native language and making some major faux pas in the process. It is difficult to make a sympathetic character out of this, but Collins infuses Emily with a plucky charm and a knowing self-confidence that makes her, and by extension, the show, compulsively watchable.

“Emily in Paris” received mixed reviews when Season 1 was released in October, so it wasn’t a sure thing to be nominated for year-end awards. As a previous nominee, Collins certainly felt more likely to get in at the Golden Globes than the show itself. The fact that “Emily in Paris” is considered one of the five best comedy series of 2020 is indicative of two things. One is that the Hollywood Foreign Press Association doesn’t align perfectly with critics, as seen by past series bids for shows with mixed reception like “The Politician” and “Smash.” But it also demonstrates the magnetism of Collins’s performance in being able to carry her show to such an honor when some better-reviewed series were overlooked.

Collins is also a producer on “Emily in Paris,” which means she would be one of the recipients if the show won Best Comedy/Musical Series. If she were to win two Golden Globes, it would be in keeping with a recent trend of multi-hyphenates winning for acting and producing, like Phoebe Waller-Bridge with “Fleabag,” Michael Douglas with “The Kominsky Method” and Donald Glover with “Atlanta.”