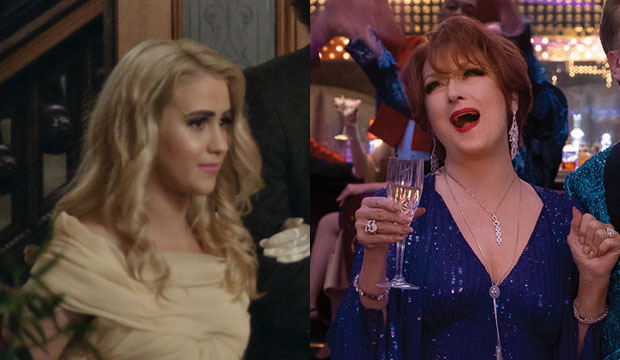 Maria Bakalova has been collecting critical plaudits left and right for her breakthrough role as the title character’s daughter Tutar in “Borat Subsequent Moviefilm.” That recognition has mostly been as a supporting actress, but she’ll be competing as a lead at the Golden Globes, where she has quickly risen up the ranks in our racetrack odds. Now she’s challenging Golden Globes queen Meryl Streep (“The Prom”) for the win.

Bakalova has been awarded Best Supporting Actress by Chicago, Florida, Indiana, New York, Online, and National Society film critics groups for her performance. And since we learned she’d be competing for Best Film Comedy/Musical Actress at the Globes, she has risen to second place with 4/1 odds based on the combined predictions of thousands of Gold Derby users. Compare that to January 1, when Bakalova was down in fourth place with 7/1 odds.

Streep still has a narrow lead with 19/5 odds for her performance as a faded Broadway diva trying to revitalize her career, and it’s even closer when you consider just the Expert journalists we’ve surveyed from major media outlets. They’re almost split down the middle. Nine of them say Streep will win, while eight are backing Bakalova, and five throw their support behind Michelle Pfeiffer (“French Exit”).

It would be a coup for newcomer Bakalova to beat Streep, who holds the record for the most Globe nominations with 33 and the most wins with eight. She also received the Cevil B. DeMille Award for lifetime achievement. It must be said, though, that it could be a double-edged sword at the Oscars. Winning a Globe as a lead would greatly raise Bakalova’s profile, but she’s being campaigned for supporting awards, where she has gotten most of her recognition thus far. If Oscar voters end up disagreeing on where to place her, she might not get enough votes for a nomination in either category.

SEEJason Woliner (‘Borat 2 director’): Sacha Baron Cohen returned ‘because of Trump and Trumpism and what it has done to America’ [EXCLUSIVE VIDEO INTERVIEW]

That’s probably what happened to Scarlett Johansson in 2003, when she got supporting and lead recognition for “Lost in Translation” along with praise for another lead role in “Girl with a Pearl Earring,” but she ended up not being nominated for either film. Similarly, Leonardo DiCaprio was pushed as a supporting actor for “The Departed” (2006) to avoid clashing with his performance in “Blood Diamond”; even though “The Departed” ended up winning Best Picture, DiCaprio wasn’t nominated for it (he did get in for “Diamond,” though). And Hugh Grant was recently nominated at the Globes as a leading man in “Florence Foster Jenkins” (2016) despite being campaign for a supporting Oscar; the academy ended up snubbing him for both performances.

But it wasn’t a problem for Kate Winslet, who had dual roles in 2008 with “The Reader” and “Revolutionary Road.” Despite being pushed as a supporting actress for “Reader,” the Oscars nominated her as a lead for that film and disregarded her “Revolutionary Road” performance altogether. She ended up winning. That’s good news for Bakalova, an indication that she could potentially march to Oscar regardless of a little category disagreement, especially since this is the only major event where she’s entered as a lead.