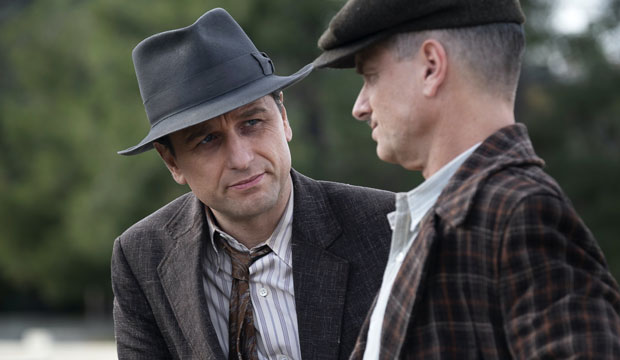 Matthew Rhys earned two Golden Globe nominations for Best TV Drama Actor for his role as Russian spy Phillip Jennings on “The Americans.” Now the Emmy-winning actor is looking for his first Globes win for his performance in the title role on HBO’s “Perry Mason.” The series, which has already been renewed for a second season, is a reimagining of the classic Earl Stanley Gardner character, which was memorably played by Raymond Burr on the classic series of the same name that ran from 1957 to 1966.

The HBO series explores the origins of the Perry Mason character, who works as a private detective assigned by a local attorney (Emmy and Golden Globe winner John Lithgow) to investigate the kidnapping and murder of a young boy. Over the course of the season, Mason’s investigation leads to tangles with corrupt police officers and a mysterious evangelical religious leader (Emmy winner Tatiana Maslany). Meanwhile, Mason deals with the psychological scars of his time serving in World War I and his relationship with his estranged wife and child. By season’s end, Mason has graduated from investigator to defense attorney, though not without paying a high emotional cost.

Rhys is nominated at the Globes for Best TV Drama Actor alongside Jason Bateman (“Ozark”), Josh O’Connor (“The Crown”), Bob Odenkirk (“Better Call Saul”), and Al Pacino (“Hunters”). Rhys, Odenkirk and O’Connor are all seeking their first wins. Bateman won Best TV Comedy Actor in 2005 for “Arrested Development,” while Pacino is a four-time winner and recipient of the Cecil B. De Mille Award for his lifetime of work in the industry.

Rhys’s interpretation of Mason totally diverges from Burr’s more buttoned-down take on the character. Rhys portrays him as a brooding, alcohol-swilling loner whose rough exterior serves as a shield for the emotional pain caused by years of service in a violent war. This new take on the character could work in Rhys’s favor with Globe voters. Additionally, there’s the chance that Rhys may be seen as overdue after not winning for “The Americans,” a performance that earned him an Emmy. “The Americans” also won the Globe for Best Drama Series for its final season, so voters may rectify the situation with a win for Rhys here.