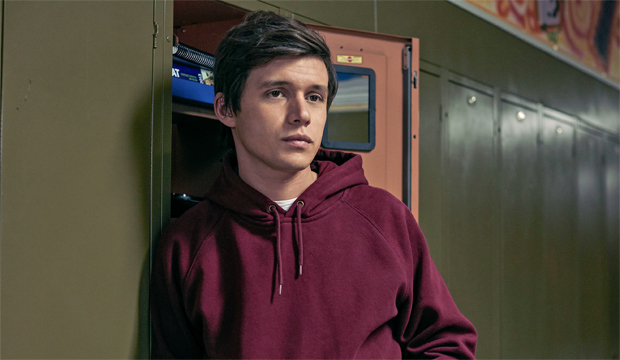 Nick Robinson was forecast to snag his career-first Golden Globe Award nomination for 2018’s coming-of-age dramedy film “Love, Simon” in comedy/musical actor, but he ended up missing out. Now, he is giving it another go, this time in the limited series/TV movie actor category for FX/Hulu’s miniseries “A Teacher,” which features an awards-worthy performance from the actor.

Robinson, 25, has naturally played a row of teenagers in his career thus far — most recently, of course, in “Love, Simon” — but his turn as 17-year-old Eric Walker in “A Teacher” boasts one of his most dramatic undertakings thus far. Based on series creator Hannah Fidell‘s 2013 film of the same name, the 10-part series explores the relationship between Eric and his 32-year-old high school English teacher Claire Wilson (Kate Mara) over the span of 11 years — covering everything from the genesis of their affair, to its fallout, to its complete fracture.

Eric has to balance being the coach of the school’s soccer team, working an after-school job to help pay the bills, aid his single mother in looking after his two younger brothers, working on college applications and, not least of all, navigating his ambivalent feelings toward Claire. This gives Robinson a lot of material to chew on, and he impresses with a thoroughly naturalistic performance that immerses you into Eric’s complicated emotional mindset, which is monopolized by his ethically ambiguous but genuine love for Claire.

In the later episodes, which chronicle Eric’s post-high school years and thus separation from Claire (who is sentenced to six months in county jail), the actor turns in some of his finest work, as he works his way through Eric’s grief. He capes it off with an impactful final scene, in which Eric pours out his heartache and acrimony to Claire after realizing that he isn’t the only one to blame for their fates.

The limited series/TV movie actor field is jam-packed. As of this writing, Mark Ruffalo (“I Know This Much is True”), Ethan Hawke (“The Good Lord Bird”), Hugh Grant (“The Undoing”), Paul Mescal (“Normal People”) and Hugh Jackman (“Bad Education”) comprise the top five in our odds in that order, while Robinson sits down in 14th place. The advantage that he, however, has is that his show will be the freshest in HFPA members’ minds, as it ran from November to December. “The Good Lord Bird” and “The Undoing” also aired fairly recently, having concluded their respective runs a bit earlier in November.

DISCUSS A Teacher limited series from FX on Hulu

Not only did the other three men’s series air way back in the spring, but all three actors scored Emmy noms, with Ruffalo taking home the golden statuette. This isn’t a strike against them per se, but the Globes typically look ahead and try to anoint new contenders and/or front-runners ahead of everyone else, which they could do with, among others, Robinson — who is also the type of younger up-and-comer they love to recognize time and again. Note that, for instance, 2019’s limited series/TV movie actor Emmy winner Jharrel Jerome (“When They See Us”) and nominee Mahershala Ali (“True Detective”) were left out at the Globes in favor of new contenders Sacha Baron Cohen (“The Spy”) and the eventual champ Russell Crowe (“The Loudest Voice”).

Worth considering, Robinson reprised his role as Simon Spier in “Love, Simon’s” Hulu spinoff series “Love, Victor,” which will compete in the comedy TV categories at the Globes. If nothing else, his guest stint could serve as a reminder of how he was cruelly overlooked for “Love, Simon” in 2019.