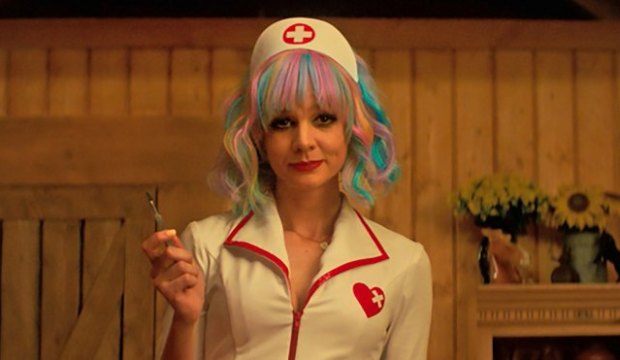 Carey Mulligan was first nominated at the Golden Globe in 2010 for her breakout film role in “An Education.” While she did win the BAFTA for Best Actress, she was unable to overcome Sandra Bullock‘s near-sweep for “The Blind Side,” including at the Globes. This year Mulligan is back with a more (ahem) “promising” chance to win with “Promising Young Woman,” a film nominated in four categories overall.

In “Promising Young Woman,” Mulligan plays Cassie Thomas, a 30-year-old in what seems to be a spiraling downward trajectory of drunkenness, one night stands and the shame of living with her parents. Eventually the darkly comedic film takes a turn as Cassie seeks to avenge her best friend who was raped and eventually committed suicide. The film was submitted to compete in the comedy fields by Focus Features, but the HFPA switched it to drama.

For Best Drama Actress, Mulligan contends against Viola Davis (“Ma Rainey’s Black Bottom”), Andra Day (“The United States vs. Billie Holiday”), Vanessa Kirby (“Pieces of a Woman”) and Frances McDormand (“Nomadland”). While Day and Kirby are first-time nominees, Davis (“Fences” in 2017) and McDormand (“Three Billboards Outside Ebbing, Missouri” in 2018) have each won here already. While comedy would have given Mulligan a potentially easier field of rivals, the weight of a win here would be more beneficial to her Oscar campaign.

Mulligan has already reaped Critics Choice, Screen Actors Guild and Independent Spirit Awards bids. She is also among the contenders longlisted by BAFTA for a nomination. The Globes will be the first of those groups to announce their winners on February 28th in a bi-coastal ceremony. “Promising Young Woman” is also nominated for Best Drama film as well as Best Director and Best Screenplay for multi-hyphenate Emerald Fennell.

Since her first Globe nomination in 2010, Mulligan has had a number of performances up for awards consideration, but none of them resulted in a nomination here until now. Her strongest chances were in 2012 for a supporting role in “Drive” which earned her a BAFTA nomination and “Shame” which earned her notices with Critics Choice and BIFA, but Globes was not ready to bite. Now, finally, Mulligan is back and poised to take control of her Globes destiny, ready for her own sweet revenge.