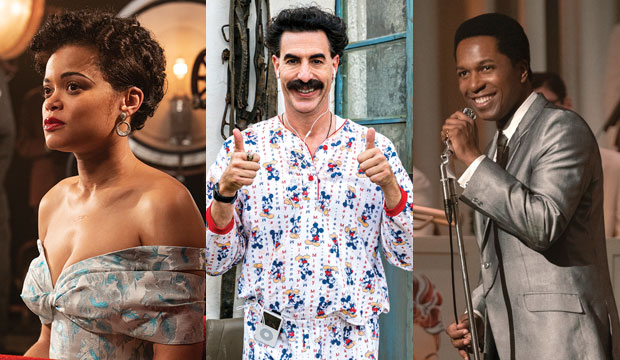 I keep debating with myself how much I should hedge my bets in my Golden Globe predictions, particularly with regard to three actors who are double-nominated in overlapping categories: Andra Day, Leslie Odom Jr., and Sacha Baron Cohen. The Hollywood Foreign Press Association is small enough (fewer than 100 members) that voters could theoretically negotiate certain outcomes, especially if they want to spread the wealth and make sure everyone is taken care of (though other times they just give everything to “La La Land”). Might they do that here?

SEEWhy Leslie Odom Jr. is an Oscars front-runner for ‘One Night in Miami’

Cohen is the heavy favorite to win for “Borat,” according to the combined predictions of Gold Derby users. A few of the Expert journalists we’ve surveyed think Lin-Manuel Miranda will upset for the Disney+ broadcast of “Hamilton,” but the fact that Cohen has two such wildly different roles in the awards conversation might give him the edge, especially since we already know Globe voters like his performance: he won this category for the first “Borat” film 14 years ago.

But if he wins for “Borat,” could he also win for “Trial” in the supporting category? It’s possible. Kate Winslet won both of her nominations when she was up for lead (“Revolutionary Road”) and supporting (“The Reader”) awards 12 years back. As of this writing we think the supporting prize will go to Daniel Kaluuya (“Judas and the Black Messiah“), but that film didn’t get much other recognition from the HFPA, with only a songwriting nom to go along with Kaluuya’s bid, so perhaps there’s limited support overall for his film.

That could open the door for Odom, whose film also received a Best Director nom for Regina King. He currently ranks third in our odds, but it’s a tight race with our Experts, Editors and users split several different ways. And while voters could take care of Odom by awarding his songwriting for the film, they might want to save that for Day.

“United States vs. Billie Holiday” is her first acting role, and the HFPA appreciated it enough to nominate her in the crowded field for Best Film Drama Actress. But Day might have an uphill climb in that race, especially against a couple of actresses whose films are also up for Best Picture: Carey Mulligan (“Promising Young Woman”) and Frances McDormand (“Nomadland”).

So voters could show their support for her music, especially since we know how much they love A-list stars in that race, like Eddie Vedder (“Guaranteed” from “Into the Wild”), Bruce Springsteen (the title song from “The Wrestler”) and Madonna (“Masterpiece” from “W.E.”), who all won this Globe even though they weren’t even nominated for Oscars for those songs. Similarly, Day’s “Tigress and Tweed” was surprisingly left off the Oscars shortlist, so Globe voters might want to make it up to her.

Our odds say this is the Globe Odom will win. But Day ranks a close second, so there is a path for victory for her, Odom and Cohen if the HFPA wants to spread its love around. Will they indeed send everyone home happy? 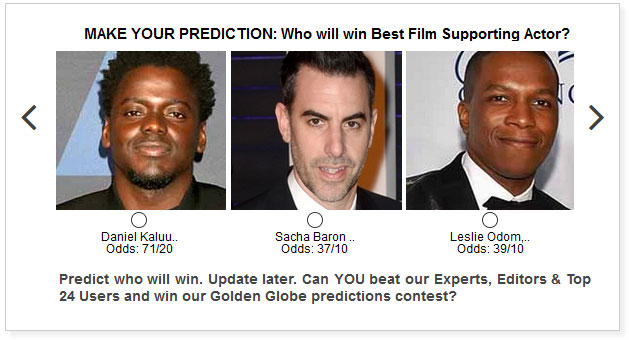