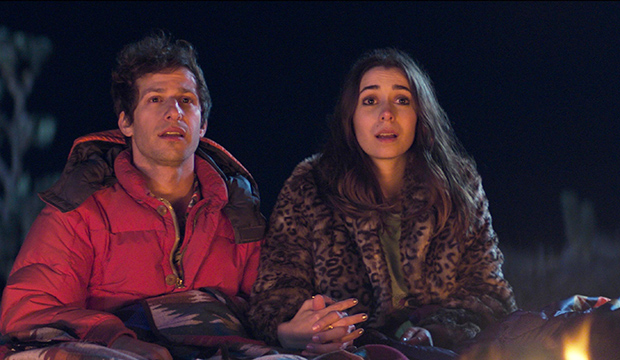 Just as Gold Derby predicted, Andy Samberg received a Golden Globe nomination for his performance in the hit Neon/Hulu film “Palm Springs.” He faces off against Sacha Baron Cohen (“Borat Subsequent Moviefilim”), James Corden (“The Prom”), Lin-Manuel Miranda (“Hamilton”) and Dev Patel (“The Personal History of David Copperfield”) for Best Film Musical/Comedy Actor. Our current odds have the funnyman in third place, but I see Samberg as one of the most plausible upsets at this year’s Globes. I’m willing to go out on a limb and predict Samberg wins for the following four reasons.

1. He’s won before — and never lost
Samberg took home a Globe for Best TV Comedy Actor in 2014 for his sitcom “Brooklyn Nine-Nine.” Sure, it was seven years ago and for television, but it proves the Hollywood Foreign Press Association has an appreciation for his work. Of the five nominees, Samberg and Baron Cohen are the only previous winners, and the “Palm Springs” star is the only one who’s undefeated. Baron Cohen lost his last two bids, and both Miranda and Patel lost all of their previous contests. This is Corden’s first nomination.

2. The frontrunners have substantial hurdles
Baron Cohen tops our odds to win this category, but I honestly think his chances are probably the worst. He already won for playing Borat 14 years ago and there has not been a single actor in Golden Globes history who has ever won for both an original film and its sequel. On top of that, if voters really want to give Baron Cohen a hug, they have multiple other places to do so, including the supporting actor category where he’s up for “The Trial of the Chicago 7.”

Second in our odds is Miranda, who was overlooked by the Screen Actors Guild Awards (in the limited series/TV movie actor category) for his own co-star, Daveed Diggs. During the original Broadway production of “Hamilton,” Miranda lost theater awards, including the Tony for Best Actor in a Musical, to his other co-star, Leslie Odom Jr. If various voting bodies can’t even agree Miranda was the top performer in his own film, will any single voting group name him as the best from all comedies/musicals? We also know “Hamilton” was deemed ineligible at the Oscars, so we’ll have to wait and see how this filmed stage production plays out at the Globes. Needless to say, these frontrunners are shaky at best.

3. This is a breakthrough film for the comic
Samberg has always been known for his slapstick comedy and immature, yet innocent, fun-loving humor. But “Palm Springs” really elevates him as an actor and he’s gotten the best reviews of his career. The film maintains an impressive 94 percent freshness rating on Rotten Tomatoes, which is quite an achievement for a comedy that is, well, actually a comedy. The film smashed viewership ratings at Hulu in its opening weekend and was one of the most successful comedies of 2020.

4. There’s no Oscar contender in the field
In many years, the winner of this contest would go on to contend for, or even win, the Academy Award. That seems highly improbable this year based on our Gold Derby odds. None of the nominees rank among the top 15 contenders for Best Actor at the Oscars, so this race is truly wide open. All of them but Patel star in films also nominated for the top comedy/musical prize, so there is broad support for mostly everyone. My point is Samberg really isn’t an underdog at all. And aside from myself, Gold Derby Expert Tim Gray and Top 24 user A_Steve_Man are betting on Samberg to pull off an upset as well.