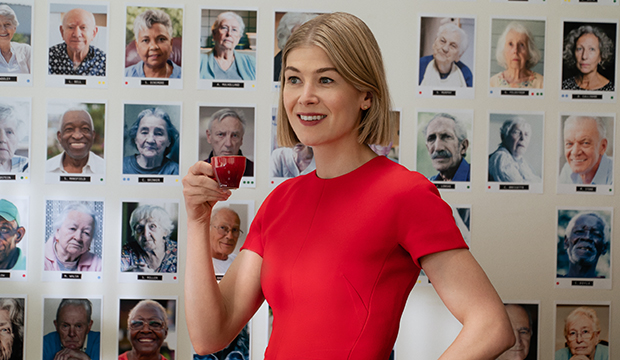 She appeared again in the Best Film Drama Actress category for 2018’s “A Private War” and contends now in Best Film Comedy/Musical Actress for “I Care a Lot,” which will be available on Feb. 19 in the United States on Netflix. This new thriller explores elder abuse in contemporary America, with a Russian mobster as the main antagonist. Pike was eligible for another drama actress nomination this year for playing Nobel Prize-winning scientist Marie Curie in the “Radioactive” biopic, but the Hollywood Foreign Press Association that votes on the Globes snubbed that portrayal.

What makes her nominations for “A Private War” and “I Care a Lot” all the more remarkable is that she represented the sole nomination for each film. “Gone Girl” received four total Globe nominations, but hers was the only one that translated to an Oscar nomination, so it seems in hindsight that the film rode her coattails to its Globe success and not the other way around.

SEE Our interview with Rosamund Pike

Although “A Private War” and Pike’s portrayal in it of late foreign affairs correspondent Marie Colvin garnered good reviews, they were not nominated for any other televised awards and their only citation from a regional critics’ group came from North Texas. “I Care a Lot” and Pike’s performance as its antihero Marla Grayson have received literally not a single nomination beyond the one from the Globes. The HFPA members are enamored with this English actress.

First-time nominee Anya-Taylor Joy is up for “Emma,” which has no other nominations, but Taylor-Joy herself is also nominated for “The Queen’s Gambit” in Best TV Movie/Limited Actress. Maria Bakalova rounds out the category with her first nomination, for “Borat Subsequent Moviefilm,” the most-nominated comedy or musical film at the Globes this year. It is also in the running for the Best Comedy/Musical Film trophy, as well as a repeat win for Sacha Baron Cohen for his iconic character in the Best Film Comedy/Musical Actor race.