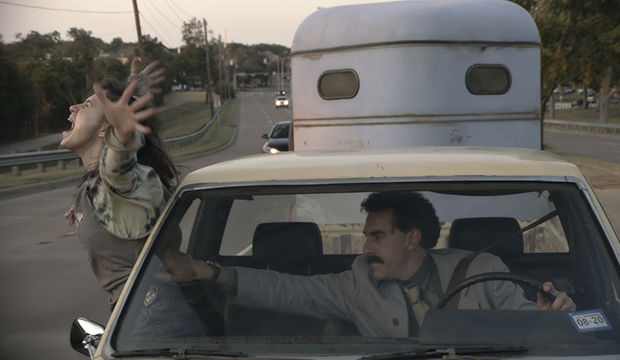 Sacha Baron Cohen has been nominated for five acting Golden Globes to date, including two this year alone. In addition to his nomination for his supporting turn in “The Trial of the Chicago 7,” he returns to the Globes for playing his most popular character, Borat Sagdiyev, in “Borat Subsequent Moviefilm: Delivery of Prodigious Bribe to American Regime for Make Benefit Once Glorious Nation of Kazakhstan.” Baron Cohen won Best Film Comedy/Musical Actor on his first attempt in 2007 for playing the titular Kazahk “journalist” in the original 2006 smash hit mockumentary “Borat! Cultural Learnings of America for Make Benefit Glorious Nation of Kazakhstan,” and was nominated the last two years on the TV side for his Showtime mockumentary “Who is America?” and the Netflix movie “The Spy.”

In “Borat Subsequent Moviefilm,” Baron Cohen reprises his role as the titular character, who’s accompanied by his 15-year-old daughter Tutar (Maria Bakalova) on his latest stateside mission to offer her up to former U.S. Vice President Mike Pence. In a series of uproarious scenes mostly filmed in secret, Borat and Tutar uncover, often brutally, the hideous underbelly of the divided social and political climate in America. They eventually return to the motherland as acclaimed Kazakh journalists after run-ins with right-wing media, the Conservative Political Action Conference, and most notoriously, twice-impeached former President Donald J. Trump‘s questionable personal attorney Rudy Giuliani.

Baron Cohen faces off against Lin-Manuel Miranda (“Hamilton”), Andy Samberg (“Palm Springs”), Dev Patel (“The Personal History of David Copperfield”) and James Corden (“The Prom”) in the race for Best Comedy/Musical Actor. Of this group, only Corden is a first-time nominee, as Miranda has been twice nominated before (for “Mary Poppins Returns” and for his song “How Far I’ll Go” from “Moana”), Samberg is a previous TV winner for “Brooklyn Nine-Nine,” and Patel has been nominated for “Lion.”

Although Baron Cohen has received a number of nominations and wins from critics groups for his “Chicago 7” performance, he does have a Chicago Indie Critics nomination for his song “Borat Subsequent Moviefilm” song “Wuhan Flu,” which was just shortlisted for Oscar consideration. “Borat Subsequent Moviefilm” is also nominated for Best Comedy/Musical Film, as well as Best Film Comedy/Musical Actress for 2020 breakout star Bakalova.

Fourteen years after his first Globe win, if Baron Cohen prevails by claiming a bookend second trophy for playing endearingly misguided Borat, he’ll claim bragging rights for being the first to win multiple times in the category for playing the same character.