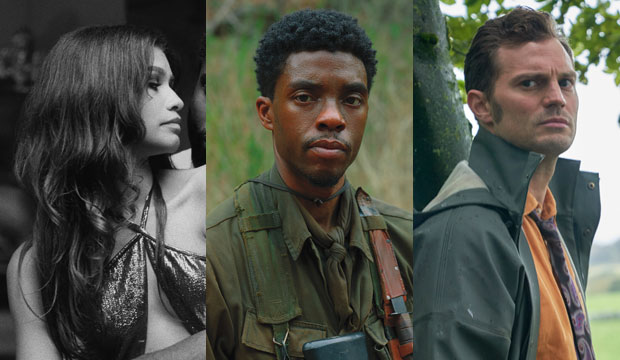 The Golden Globes announce their nominations on Wednesday morning, February 3, and we’ve been predicting who will make the cut for months. But there are a number of contenders who aren’t among our predicted nominees that I think we should watch for. Keep an eye out for these 13 potential surprises on Wednesday morning.

We’re predicting a Best Director nomination for Spike Lee, but we’re not currently betting on the film in the top category. However, this timely film about Black soldiers returning to Vietnam decades after their service could strike a chord after year of Black Lives Matter protests. And the Globes have embraced Lee in the past, nominating him for directing “Do the Right Thing” (1989) even though the Oscars ultimately snubbed him.

The pandemic has left the field without a lot of big, flashy studio productions, so this old-fashioned Western from Universal could stand out for voters. And with likely nominees including “Ma Rainey’s Black Bottom,” “Mank” and “The Trial of the Chicago 7,” this would be a chance for the always-diplomatic Globes to avoid making these strictly the Netflix Awards.

Her film only started screening for the press in January, so with a few more days or weeks Zendaya may have risen into our top five, but as it stands she’s right on the bubble. The reviews for the film are somewhat mixed, but Zendaya gives an emotional showcase performance. And she’s also coming off an Emmy win for “Euphoria,” plus a special “Euphoria” episode during the fall, so the Globes may not be able to resist anointing such a rising star.

Hanks was nominated just last year for “A Beautiful Day in the Neighborhood,” and he also gave a memorable acceptance speech for his Cecil B. DeMille Award for lifetime achievement. With 10 total nominations and four competitive wins, he’s a Globes darling, so he could certainly break into the top five with his performance as a heroic news reader in 19th century America.

We’re predicting lead-acting nominations for the stars of these literary adaptations — Anya Taylor-Joy and Dev Patel, respectively — and often those go hand-in-hand with Best Film noms. “Emma” could also benefit from Taylor-Joy’s added “Queen’s Gambit” buzz, and “Copperfield” has a strong pedigree with its writer-director Armando Iannucci (“Veep,” “In the Loop,” “The Death of Stalin”).

This dark comedy sparked buzz when it premiered at the Toronto Film Festival last fall. Pike’s role as a con artist taking advantage of the elderly might appeal to the same voters who nominated her for “Gone Girl” (2014). And the Hollywood Foreign Press Association likes her so much they also nominated her for “A Private War” (2018) despite that film not getting much traction elsewhere during its awards season.

SEE‘Mank,’ ‘Trial of the Chicago 7’ and ‘Nomadland’ will clean up at the Golden Globe nominations, according to our predictions

This Irish rom-com star could follow in the footsteps of past Globe champ Hugh Grant (“Four Weddings and a Funeral”) and Globe nominee Ewan McGregor (“Salmon Fishing in the Yemen”). The Globes also like to invite stars and projects with big fan bases to their party (consider the nominations for shows like “Outlander” and films like “Bohemian Rhapsody” and “A Star is Born”). So the “Fifty Shades of Grey” star could be right up their alley.

We’re predicting the film to win Best Film Comedy/Musical and Best Comedy/Musical Actress (Meryl Streep). If they like the film that much, it makes sense that leading man Corden would get to join in the festivities.

It can’t be overstated just how much the HFPA loves Kidman. She has been nominated 14 times for acting, including four wins. Since Globe voters also adore movie musicals (see above regarding Corden), we mustn’t count her out of this race, even though she doesn’t rank this high in our predictions for other events this season like the Oscars and SAG Awards.

We’re predicting that Boseman will win Best Drama Actor for “Ma Rainey’s Black Bottom,” but what about his other standout performance last year? After his untimely death at age 43, voters may feel an urgent need to nominate him for both of his final film roles.

There was controversy over the Globes’ decision to place the American film “Minari” in the foreign-language category and not the drama category (the dialogue is largely in Korean). Nominating its director might smooth things over, especially since the cross-cultural film might already appeal to the international journalists who make up the HFPA.

We’re predicting Carey Mulligan to be nominated for her lead performance, but the film’s provocative storytelling has also made headlines — everyone is still talking about that ending. They may decide to celebrate that by nominating Fennell’s script.