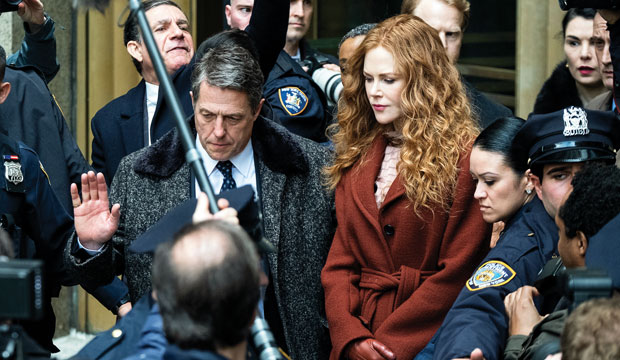 The far-and-away front-runner in our Golden Globes odds, Netflix’s “The Queen’s Gambit” looks unbeatable in the Best TV Movie/Limited Series category, judging from the combined predictions of Gold Derby users. But not so fast, I say! It’s nominated against Amazon’s “Small Axe,” Netflix’s “Unorthodox,” HBO’s “The Undoing” and Hulu’s “Normal People,” which trail it in that exact order in our odds. Here are six reasons why you should have “The Undoing” much higher in your predictions and shouldn’t be shocked if it snatches the “Queen’s” predestined crown.

Based on Jean Hanff Korelitz’s 2014 novel “You Should Have Known,” the six-part miniseries centers on Grace Fraser (Nicole Kidman), whose picture-perfect New York life is thrown into turmoil after a family acquaintance is murdered and her husband Jonathan (Hugh Grant) suddenly disappears. While the show received somewhat mixed reviews and split audiences with its finale, its whodunnit formula and wild twists kept eyes glued to the screen and offered much-needed escapism after such a gloomy year. It’s not hard to imagine the members of the Hollywood Foreign Press Association similarly taking to this pulpy, exhilarating roller coaster.

2. It has star power in front of and behind the camera

It’s no secret that the HFPA loves Grant and Kidman. Grant is a six-time nominee and winner for the romantic comedy film “Four Weddings and a Funeral” (1994). Kidman, also an executive producer on “The Undoing,” is a 16-time nominee and five-time winner. In addition to these two in bombastic leading roles, the show features a star-studded supporting cast that includes Noma Dumezweni, Noah Jupe, Lily Rabe, Édgar Ramirez and Donald Sutherland.

Behind the camera, it boasts writer David E. Kelley, who has been showered with 85 Globe nominations for 10 of his series over the years, and director Susanne Bier, whose last small-screen effort, “The Night Manager,” bagged three Globes. While the HFPA can’t have the cast and crew walk on stage this year due to the COVID-19 pandemic, it can still have them charm and entertain the virtual room.

The show broke viewership records. In December it was revealed that it was HBO’s first original series to gain viewership every week over the course of the season, and that its finale was the most watched night on the premium-cable network since the season two closer of “Big Little Lies” (which was also written by Kelley and starred Kidman).

What’s more, it was recently announced that it was the network’s most watched show of all of 2020 and drew in more viewers than both seasons of “Lies.” If there’s one group that would want the bragging rights of recognizing such a water-cooler show, it’s the HFPA, especially since it has the chance to be the first major awards group to do so.

4. It’s the most nominated limited series of the year

The show netted three additional citations for Grant in Best Actor, Kidman in Best Actress and Sutherland in Best Supporting Actor, making it the most recognized limited series of the year. In fact, it has twice as many nominations as its four competitors, which have just one acting nom apiece. This strong showing suggests overwhelming support from the HFPA and potentially gives it a leg up in this race.

HBO has won this category 19 times, including last year for “Chernobyl.” HFPA members are well known for spreading the wealth to multiple networks and studios, and this might be the best place for them to hand HBO a series prize this year.

While the network has two other series noms for “Lovecraft Country” in drama and “The Flight Attendant” — which is on HBO Max — in comedy, those two shows might face an uphill climb. “Lovecraft” received no other bids outside of series and faces three multi-nominated Netflix behemoths as well as cultural phenomenon “The Mandalorian,” while “The Flight Attendant” has to duke it out with three other rookie contenders and the now-ended “Schitt’s Creek,” which just swept the Emmys.

For its first season, “Lies” was a rare show to sweep the Globes, winning every single one of its categories in 2018. And even though its second season — which competed in drama categories — went home empty-handed last year, it still earned three citations including Best Drama Series. Sure, “The Undoing” isn’t fresh off of eight Emmy wins like “Lies” was in 2018, but it has all the heat that can make it an Emmy winner later this year.