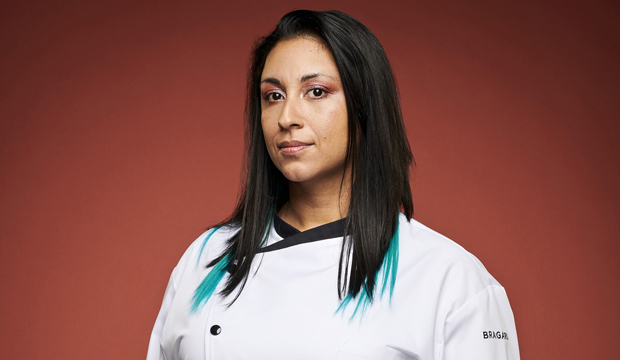 At the end of Thursday’s third episode of “Hell’s Kitchen,” Chef Gordon Ramsay made the bold decision to eliminate a contestant who’d just been struck with an illness: Fabiola Fuentes. His choice was solidified when she failed to cook a flatbread pizza properly (first she under-cooked it, then she burned it). “To be my head chef, you need to have passion, leadership and great skills,” Ramsay explained about his decision. “Fabiola had passion and not much else.”

Earlier in the episode, this 32-year-old California resident had a breakdown in the car after returning from the dune buggy reward in the Las Vegas desert. The medics checked her out and diagnosed a panic attack and dehydration, but it wasn’t bad enough to keep her from competing in the dinner service challenge. Some of the other chef-testants, including Lauren Lawless, seemed to accuse Fabiola of exaggerating her illness.

Fabiola and Jordan Savell were Ramsay’s bottom two contestants of the week for their poor showings during dinner. Originally the Red Team nominated Lauren and Nicole “Nikki” Hanna for elimination, but Ramsay disagreed with both of their choices, arguing, “‘Hell’s Kitchen’ is a journey. It’s not what you come in here with, it’s what you do. When I ask you to give me two nominees, I expect you to take this seriously. I’m not too sure what kitchen you’re in tonight, but from where I was standing, you have the wrong two.”

Ramsay gave Fabiola and Jordan a chance to save themselves with passionate speeches. Fabiola proclaimed she was “embarrassed” with her flatbread drama, but that she’s “strong” and has “a great bounce-back.” Jordan, who earlier served raw duck, noted she has “more to show” and that she’ll “step up” if given another chance. After a quick deliberation, the reality TV host sent home Fabiola.

“I wish my health was in better [shape], and that’s me,” Fabiola told the camera after her elimination. “I tried to fight for myself as much as I could. I knew I failed and I knew that I bounced back. I was extremely embarrassed.” She couldn’t finish her exit interview because she broke down in tears.