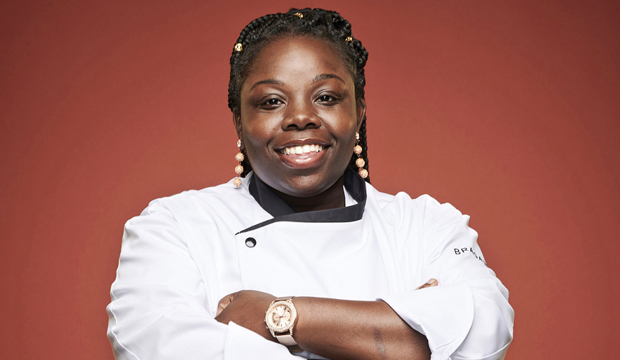 “Sy’s winning personality and determination were enough to take her far, but a lack of experience made me say sayonara,” host Gordon Ramsay proclaimed at the end of the seventh episode of “Hell’s Kitchen.” He was referring to Syann Williams, the 26-year-old line cook from Atlanta who stole America’s heart during this Las Vegas-themed installment. Sy started out the season strong, winning the Punishment Pass reward in the second episode for her shrimp and grits dish. However, she wasn’t able to keep up that momentum and ended up being the eighth person eliminated.

After Sy’s emotional jacket removal, the former Red Team member remained optimistic in her exit interview. “Although I may not be ready right now for Lake Tahoe, my journey was amazing,” she said, referring to the season’s ultimate prize of being Chef Ramsay’s head chef at his Hell’s Kitchen Lake Tahoe Restaurant. “I fought every day. Chef Ramsay told me to keep my head up and that’s exactly what I’m gonna do. Period.”

Sy ended up on the chopping block after her poor performance on the fish station during dinner service. She repeatedly over-cooked or under-cooked the salmon, which was part of the reason Chef Ramsay threw the Red Team out of the kitchen altogether. When it came time for the ladies to nominate two people for elimination, Sy volunteered. The other person they chose was Kori Sutton, but Chef Ramsay took issue with that decision and put up Jordan Savell instead.

“Ladies, if you obviously think that Kori deserved to leave this competition tonight, you girls are dreaming,” he told the Red Team. “Cut the bulls***. Is that clear?” The women thought Kori was to blame for their poor performance because she kept getting the tickets wrong. Chef Ramsay felt that Jordan was more of a disaster because of her overcooked steaks and firing up wrong dishes.