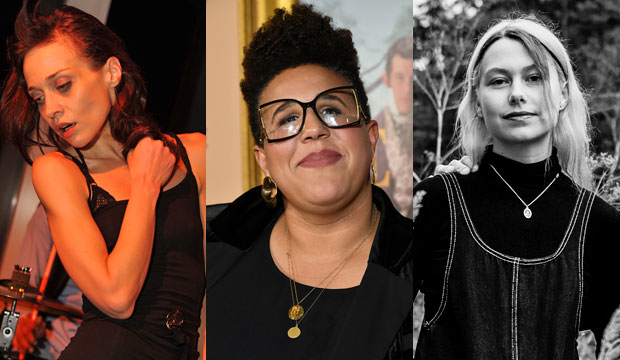 The Grammys have often been a boys club, and that has particularly been the case in rock and alternative categories. Men have dominated the race for Best Alternative Album since it was established 31 years ago. Only two solo female artists have ever taken home the prize: Sinead O’Connor for “I Do Not Want What I Haven’t Got” (1991) and St. Vincent for her self-titled album (2015). This year, however, three of the five nominees are solo women. And they all have more overall nominations support than their male counterparts. Will one of them win?

The most nominated artist in the category is Brittany Howard. She has five bids this year across genres: in addition to this bid for “Jaime,” she has a couple in rock (Best Rock Performance and Best Rock Song for “Stay High”), one in roots (Best American Roots Performance for “Short and Sweet”) and one in R&B (Best R&B Performance for “Goat Head”). She’s also the most awarded of this year’s nominated women, having previously won four times as the front woman of the band Alabama Shakes. That includes a victory in this very category for “Sound and Color” (2016).

Phoebe Bridgers is next in line with four bids. She contends in this category for her critically acclaimed album “Punisher.” She’s also up for Best Rock Performance and Best Rock Song for “Kyoto.” And she’s nominated for Best New Artist, which makes her the only artist in this race with a bid in the general field, though she’s also the only nominee here who was eligible for Best New Artist, so that may or may not indicate more academy support for her than her rivals.

Veteran Fiona Apple has three noms, though that actually ties for her most noms in a single year. She was also nominated three times when she broke through in 1998. That was the year she won her lone Grammy for Best Female Rock Vocal Performance (“Criminal”). This year she’s nominated for Best Alternative Album for “Fetch the Bolt Cutters,” plus Best Rock Performance and Best Rock Song for “Shameika.”

Apple leads our early odds based on the combined predictions of Gold Derby users. She’s the favorite at 31/10, followed by Howard with 4/1 odds and Bridgers with 9/2 odds. So the vast majority of users think a solo woman will win this award, even if they can’t agree on which one it will be. Though we probably shouldn’t underestimate their male adversaries, given this category’s historically masculine bias. Beck is nominated for “Hyperspace” and he’s tied with Radiohead and The White Stripes as the biggest winner of all time with three previous victories. And Tame Impala are nominated here for the third time for “The Slow Rush.”