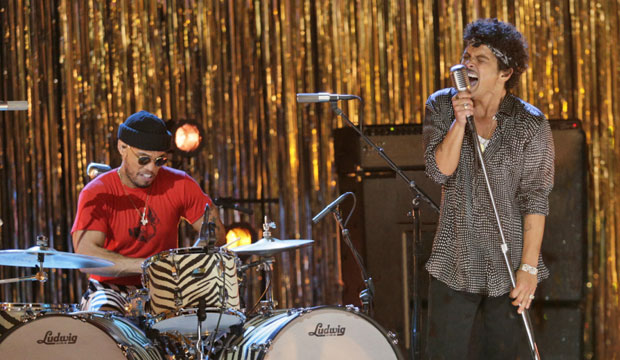 The R&B field at the Grammys is often one of the most interesting, with a balance of big hits, buzzy newcomers, and established veterans, and usually a couple of surprises when it comes to winners. Let’s review who’s in contention to get noms in the genre at this stage of the race.

Anderson Paak and Bruno Mars will surely be in contention for their work as supergroup Silk Sonic. Their song “Leave The Door Open” has been a smash, peaking at number-one on the Billboard Hot 100 with success on radio and streaming. The song is also very traditional, inspired by retro R&B, which is definitely something the Grammys are into. And Mars and Paak are Grammy favorites, with Mars’s last project, “24K Magic,” sweeping its six noms including three R&B categories. Paak, meanwhile, has four Grammys including two R&B awards for his album “Ventura” and song “Come Home.”

Another R&B superstar who will probably be there on nominations day is SZA. The nine-time nominee has two big hits this round, the urban radio smash “Hit Different” alongside Ty Dolla $ign and The Neptunes as well as the Hot 100 top-10 single “Good Days.” She could perhaps also get an album nom for her highly anticipated sophomore project, expected to come out this year. Her previous album, “Ctrl,” got a nomination for Best Urban Contemporary Album (now called Best Progressive R&B Album).

Grammy darling H.E.R. might also have more R&B noms coming her way. Her debut studio album, “Back Of My Mind,” is slated for release soon, and could be a front-runner for Best R&B Album or Best Progressive R&B Album, depending on where it’s submitted. Her single “Damage,” which topped urban radio recently, might get noms across the board, and she could even get in with her Oscar-winning anthem “Fight For You” from the “Judas and the Black Messiah” soundtrack. A new single, “Come Through” featuring Chris Brown, could also be a contender. H.E.R. is also in an interesting position: a Progressive R&B win and a Traditional R&B Performance win would give her victories in every R&B category. Her previous wins were Best R&B Album for her debut EP “H.E.R.,” Best R&B Performance for “Best Part” alongside Daniel Caesar, and most recently Best R&B Song for “Better Than I Imagined” with Robert Glasper and Meshell Ndegeocello.

Another R&B star poised for noms is Giveon. The buzzy newcomer already got a nom last year for his EP “Take Time,” and this year he could get a couple more for his hit “Heartbreak Anniversary,” which has been rising on the Hot 100. The singer could even get a nom for his number-one hit “Peaches” with Justin Bieber and Daniel Caesar if Bieber’s team wants to submit it to R&B instead of pop. Bieber complained to the academy about his last album, “Changes,” getting nominated for Best Pop Vocal Album instead of in the R&B categories as he intended, so maybe the screening panel will comply with his wishes this year.

Other artists who could get a lot of R&B love this year are Jazmine Sullivan and Arlo Parks. Sullivan’s an established act at this point, with many considering her overdue for a win (she has 12 nominations without a victory). Her album “Heaux Tales” was received well and even charted two songs on the Hot 100, and Sullivan has been promoting it well, including a viral NPR “Tiny Desk Concert.” Parks on the other hand is a newcomer whose debut album, “Collapsed In Sunbeams,” has received critical acclaim, with artists like Billie Eilish and Phoebe Bridgers voicing their support for her work. Her triple-A hit “Hurt” could also get her a nom somewhere.

There’s a couple more names that could pop up on nominations morning so far, including but not limited to Brent Faiyaz with his ht “Gravity” alongside Tyler the Creator and DJ Dahi; Doja Cat’s viral hit “Streets” (assuming it’s submitted here or at all); Grammy winner Ella Mai’s new hit “Not Another Love Song,” which is rising on the R&B airplay charts; and last year R&B Performance nominee Ty Dolla $ign with his “Featuring Ty Dolla $ign” album. We could also potentially see crossover artists like Jacob Collier, Bieber, and Ariana Grande submit tracks to the R&B field this year.

And of course, despite his intended boycott, tracks from The Weeknd’s “After Hours” are eligible in case he changes his mind … just saying.