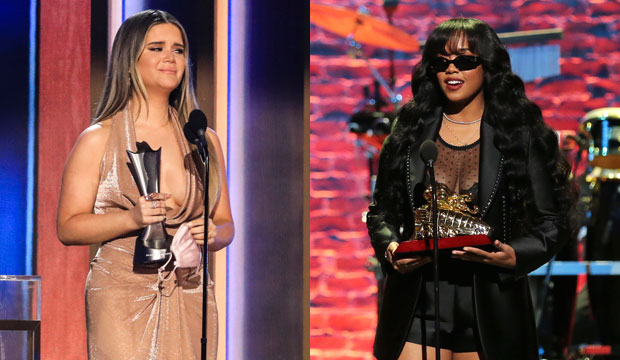 The Grammys can be a little unpredictable, to say the least. And there isn’t a whole industry of precursor award shows designed to build up to an eventual Grammy win, like the SAG Awards, Golden Globes, and BAFTAs do before the Oscars. That said, there are still awards that can help you out with your Grammy predictions, and a couple we might even be able to look to for consistent guidance moving forward.

The Soul Train Music Awards are probably the strongest predictor for the Grammys. Winning Album of the Year there almost guarantees an Album of the Year nom from the recording academy, with eight out of the last 10 Soul Train winners getting in. The only exceptions were Chris Brown’s “F.A.M.E.” (2011), which probably missed at the Grammys in no small part due to Brown’s assault allegations against Rihanna at the time, and Summer Walker’s “Over It” (2020). But even with “Over It” missing, the Grammys gave a spot to Jhene Aiko‘s “Chilombo,” which also got a Soul Train AOTY nomination.

The correlation is even stronger for the R&B field. Ever since Album of the Year was revived for the 2009 Soul Train Music Awards after not being presented from 2005 to 2008, all the winners have won in R&B categories at the Grammys, with the only exception being Walker, who wasn’t nominated for any Grammys this year.

The only exceptions have been Brooks and Dunn’s “Believe,” which missed the 2007 Grammys; Miranda Lambert and Blake Shelton’s “Over You,” which was snubbed at the 2013 Grammys; and Luke Combs’s “Beautiful Crazy,” which was submitted for the 2019 Grammys before it peaked commercially. Other than those, though, we’ve been able to count on this category to correspond with the recording academy.

Similar to the CMAs, the ACMs can help us figure out who is getting recognition from the recording academy, though the CMAs are more predictive since they’re held before the Grammys, while a lot of artists have already gotten their Grammy noms by the time they show up at the ACMs. With that in mind, it’s always smart to see which albums show up at the ACMs first in the spring and then at the CMAs in the fall. That might be a sign of momentum leading towards the Grammys.

Granted, the country nomination review committee at the Grammys snubbed the winner of both awards last year (Luke Combs’s “What You See is What You Get”), so maybe it’s better to have an album that lost both as your top choice these days.

The VMA for Best Direction is a pretty good indicator of Best Music Video noms at the Grammys. Since 2010, only two VMA Direction winners haven’t been nominated: “Make Some Noise” by the Beastie Boys (2011) and most recently “The Man” by Taylor Swift (2020). Even then, their slots at the Grammys were filled by two other Direction nominees, “Rolling in the Deep” by Adele and “Adore You” by Harry Styles, respectively. A couple other technical VMA categories like Best Visual Effects and Best Cinematography are also worth keeping in mind, since they indicate the kinds of visually striking clips that the recording academy often goes for.

These awards are a good precursor for the country and Americana fields at the Grammys. Three out of the six Song of the Year nominees at this award show in 2020 got Grammy nominations, as did four out of the five Album of the Year nominees. Besides that, artists like Brandi Carlile, Black Pumas, Tanya Tucker, and Yola first broke through at this show before crossing over to the general field at the Grammys, so these kudos are worth checking out.