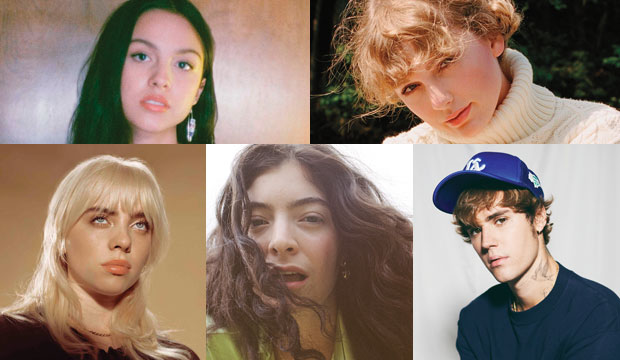 Pop culture moves so fast these days that I could swear Lorde, Billie Eilish, and Olivia Rodrigo represent three entirely different generations of singer-songwriters. But they’re actually close enough in age to be sisters — they’re basically one HAIM. But all three artists rose to fame as musically precocious teenagers, and they’re all eligible for nominations at the upcoming 2022 Grammys. In fact, this year’s awards could be dominated by artists who showed talent beyond their years. Taylor Swift, Justin Bieber, and Shawn Mendes could also be recognized, and they were also eligible for Grammys before they were eligible to vote.

Swift released her self-titled debut album in 2006 when she was just 16-years-old. Bieber’s debut EP “My World” dropped in 2009 when he was 15. Lorde broke through with her first studio album “Pure Heroine” in 2013 at 16 and won Song of the Year at the Grammys a few months later when she was 17. Mendes released his debut album “Handwritten” in 2015 at 16. Eilish was 15 when she released her EP “Don’t Smile at Me” in 2017, and she made history by winning Album of the Year at the Grammys for her first studio album “When We All Fall Asleep, Where Do We Go?” in 2020 at age 18. And Rodrigo turned 18 earlier this year between the release of her chart-topping single “Drivers License”  in January and her critically acclaimed debut album “Sour” in May.

And that’s not all. Tyler the Creator was 18 when he dropped his debut mixtape “Bastard” in 2009. Demi Lovato was 16 when they released their first album “Don’t Forget” that same year. Nick Jonas was a wee lad at 13 when the Jonas Brothers debuted with their album “It’s Time” in 2006. And while Ariana Grande didn’t release her debut album “Yours Truly” until the ripe old age of 20, by then she had already become a Nickelodeon teen star. All of them have albums up for consideration this year, and they’re all past nominees or winners.

Youth is nothing new in the music industry, of course. Music stars and music television networks throughout history have been built on young acts appealing to young fans — from The Beatles to Britney Spears to BTS — but critics and the recording academy have been catching on quickly in recent years, to the point where Swift at 31 and Bieber at 27 are already grizzled Grammy veterans. Lorde at 24 and Eilish at 19 have also been around the block a couple times, enough to have influenced Rodrigo’s burgeoning music career.

But how many of them will be nominated for Grammys? In the race for Album of the Year, Swift (“Evermore”), Eilish (“Happier Than Ever”), and Rodrigo (“Sour”) rank second, third, and fourth in our odds, based on the combined predictions of Gold Derby users. Lorde (“Solar Power”) and Bieber (“Justice”) aren’t in our predicted top eight as of this writing, but they’ve both been nominated for Album of the Year before, so we mustn’t count them out.

You can feel the generations shifting ever faster in the music industry. That could lead to a particularly young Grammys lineup. Though with the recording academy eliminating nomination review committees this year, there’s a chance the often older-skewing tastes of the general Grammys membership could lead to a return to an era where older veterans reign; keep in mind that Bruce Springsteen, Paul McCartney, and Foo Fighters all have new albums up for consideration. But even if the old-timers stage a comeback this year, youth has clearly not been wasted on the young in the current music industry.