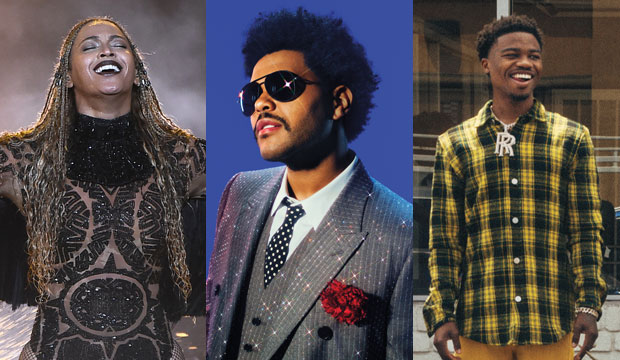 One of the biggest shockers when Grammy nominations were announced was seeing how little Black Lives Matter and the continued call for wider representation in the recording academy had impacted them. The biggest front-runner before nominations was The Weeknd, but was completely shut out in favor of white artists in the general field like Coldplay and Post Malone. There’s only one Black nominee in the entire pop field (Doja Cat for “Say So”). And the only Black artists nominated for Album of the Year are Eric Burton, who’s one half of Black Pumas, and Jhené Aiko, who’s of mixed race.

That said, a couple of songs did probably benefit from 2020’s focus on race issues. Beyoncé’s “Black Parade,” which was considered a long shot, got nominated for both Song and Record of the Year, in addition to two noms in the R&B field, making it the most nominated song of the year. H.E.R.’s “I Can’t Breathe,” whose nomination for Song of the Year we had been expecting, was also well received due to its heartbreaking approach to the subject of racism. And Best New Artist shone a spotlight on many Black artists that were not widely predicted but were still very much deserving, like D Smoke, Chika, and Kaytranada, along with the higher-profile front-runners Megan Thee Stallion and Doja Cat.

But perhaps there was an impact in less direct ways. For instance, one welcome surprise this year was Roddy Ricch getting into Song of the Year for “The Box.” Rap songs in general have a hard time getting into the top songwriting category category, and when they do they’re usually inspirational or political (like Macklemore and Ryan Lewis‘s “Same Love” or Kendrick Lamar‘s “Alright”). It was nice seeing “The Box,” which offers very clever songwriting despite not having any particular social justice message, get to compete in the big leagues without having to be topical Grammy bait.

Grammy voters, or at least the nomination review committee, might’ve felt the need to stop holding rap to an unfair standard when it comes to lyricism; a hip-hop song doesn’t have to be “deep” to be well-written, and “The Box” is an example of that. It’s worth pointing out that there were political rap songs this year that could’ve gotten a nod like Lil Baby’s “The Bigger Picture” and Run the Jewels’ “Walking in the Snow”; the Grammys simply chose to reward one that isn’t, which, to be honest, might feel even better. It (hopefully) sets a precedent for a more equal standard among genres.

But there’s still a long way to go. Less mainstream acts like Run the Jewels still should’ve easily broken through this year with the massive critical acclaim for their album “RTJ4” and the political urgency of the year, yet got completely shut out, even in the rap field. There’s a lot of other music that addressed the issues that plagued 2020 and challenged the listener to act, yet it seems like the committees only noticed when it came from familiar faces like Beyoncé and H.E.R.

In that same vein, the R&B panel also seemed to nominate familiar faces over deserving acts who haven’t gotten a real shot at big Grammy glory, especially women; artists like Teyana Taylor, Tinashe, and Brandy all got snubbed despite delivering acclaimed and/or commercially successful albums in favor of an all-male lineup for Best R&B Album. Obviously sales and hype aren’t everything, but what’s the excuse for snubbing women in the lineup entirely?

There’s definitely a lot to work on at the Grammys. Artists like The Weeknd getting snubbed in the pop field over critically underwhelming albums like Justin Bieber‘s “Changes” is wrong on all levels (it didn’t even sell more than The Weeknd’s album, so you can’t base it on sales either), and nominating the same people over and over again feels like uninspired tokenism. That said, NARAS does seem to be making efforts, though quite slowly, so hopefully the outlook will be better 10 years from now.