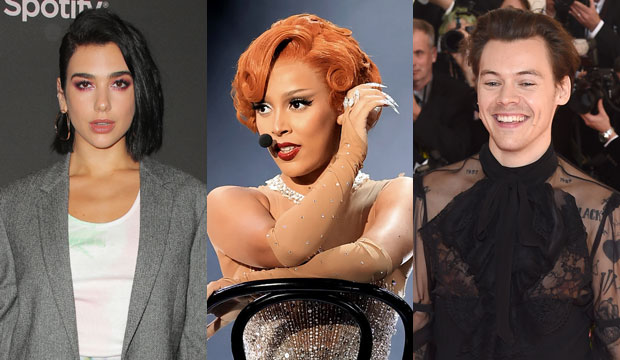 Much like other major award shows, nominees for the Grammys often go on big media tours in order to promote themselves and their nominated work in hopes of boosting their chances of a possible win. While Grammy campaigning is definitely not as in-your-face as Oscar campaigning, it can still help keep artists in the public eye and potentially sway votes their way. After winners last year like Billie Eilish, Lizzo, and Lil Nas X did their campaigning due, let’s see who did theirs for this year’s ceremony.

One of this year’s biggest campaigners has been Dua Lipa, nominated for six awards including Album, Record, and Song of the Year. Lipa got a coveted spot on the “SNL” Christmas episode hosted by series alum Kristen Wiig, where she performed her three-time nominated song “Don’t Start Now.” Lipa also stopped at other spots, including Netflix’s “SongExploder,” where she did a full breakdown of her song “Love Again” and talked about the inspiration behind the “Future Nostalgia” album. She also dropped by Jimmy Fallon’s “Tonight Show,” YouTube’s “Hello 2021” series, and perhaps most importantly NPR’s “Tiny Desk Concert.”

Another artist who was quite active was Taylor Swift. She released a whole new album, “Evermore,” received with much acclaim just like her currently nominated collection “Folklore.” She also appeared at the Apple Music Awards and “Jimmy Kimmel Live,” and her song “Willow” has been doing consistently well across the board, topping the Billboard Hot 100 and remaining in the top 30 after nine weeks as of this writing. Swift also released a Disney+ documentary for “Folklore,” titled “The Long Pond Studio Sessions,” in which she performs songs from the album and talks about the creative process behind them.

Best New Artist contenders have not been shy to campaign either. Front-runner Megan Thee Stallion stopped by James Corden’s “The Late Late Show” for an interview, performance, and a skit, and she did a whole show for her Apple Music Awards performance. She has also racked up two more hit songs with “Body” and “Cry Baby,” the latter of which features current four-time Grammy nominee DaBaby.

Doja Cat performed at “New Year’s Rockin’ Eve” and iHeartRadio’s Jingle Ball 2020, and also released the “Hot Pink” sessions to her YouTube channel. Finally, Phoebe Bridgers has released new music through the season, with a whole Christmas EP dropping in December as well as a music video for her song “Savior Complex” off her Grammy-nominated album “Punisher”; the buzzy video was directed by Phoebe Waller-Bridge and featured “Normal People” breakout star Paul Mescal. Bridgers also stopped by again at “The Late Late Show” and did an interview with Sam Sanders for NPR’s “It’s Been A Minute.”

Three-time nominees this year Chloe x Halle have also been killing it, recording their own “Tiny Desk Concert” and performing at “Rockin’ Eve,” VerizonUp, and Billboard’s Women In Music ceremony. Finally, other nominees like Black Pumas, PJ Morton, and Michael Kiwanuka have done their own “Tiny Desk Concerts” as well, while Jhené Aiko stopped at “The Tonight Show” and Harry Styles released a music video for his track “Treat People With Kindness.”

So there was no shortage of opportunities for Grammy voters to catch up with some of this year’s top contenders during the final round voting period of December 7 to January 4. We’ll find out whose campaigning paid off when the trophies are handed out on March 14.