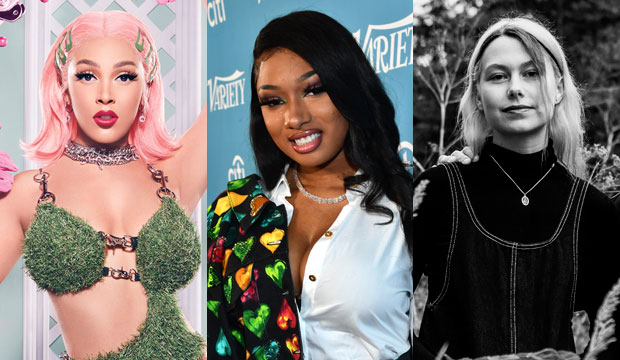 The Grammy Award for Best New Artist is a push from the industry for their favorite up-and-coming musicians making waves. While some past winners have admittedly faded away, a lot went on to become decade-defining or even generation-defining artists, like The Beatles (1965), Mariah Carey (1991) and Adele (2009). Let’s see who’s in line this year to join this list of influential winners.

One of the front-runners here is definitely rapper and internet sensation Megan Thee Stallion. Megan notched two number-one hits in 2020, including the three-time Grammy-nominated song “Savage” with Beyoncé. Not only that, but her debut studio album “Good News” debuted at number-two on the Billboard 200 albums chart, becoming her third top-10 effort after her mixtape “Fever” (2019) and EP “Suga” (2020). Megan has also received acclaim for her confident lyrics and music, with “WAP” and “Savage” ending the year as the two most acclaimed songs of 2020 according to AlbumOfTheYear.org’s aggregate year-end list. Her album was also showered with acclaim, scoring 85 on Metacritic.

All of that might make you think that Megan is a lock for this award, but don’t be so quick to dismiss the rest of the nominees; the Grammys have a bad track record with hip-hop artists in the general field. That said, Best New Artist has been the general field category most friendly to hip-hop, with Arrested Development (1993), Lauryn Hill (1999), Macklemore and Ryan Lewis (2014) and Chance the Rapper (2017) all prevailing. Can Megan overcome genre bias and join that list? Probably, but there are a few spoilers to watch out for.

If Megan misses, singer/rapper Doja Cat might be the one to capitalize. Much like the aforementioned Macklemore and Ryan Lewis as well as Lauryn Hill, Doja has a pop flavor despite considering herself a rapper too. Her smash hit “Say So,” which is nominated for Record of the Year as well as Best Pop Solo Performance, walks the line perfectly between her genre influences. And while Doja hasn’t scored as many hits as Megan, she has had a slew of minor hits including “Juicy,” “Best Friend,” and more recently her viral hits “Like That” and “Streets.” With no other mainstream-pop nominees in the lineup, perhaps Doja can take that whole voting bloc, and therefore the award.

But what if the Grammys want to go for something more artsy? Past winners like Esperanza Spalding (2011) and Bon Iver (2012) have beaten commercial favorites before, after all. Well, in that case the next in line is likely four-time nominee Phoebe Bridgers, who took the critical sphere by storm with her sophomore album “Punisher.” Bridgers, who is also nominated for Best Rock Song, Best Rock Performance, and Best Alternative Album, has been a fixture on year-end lists, with “Punisher” ranked as the second most acclaimed album of the year according to both Metacritic and AlbumOfTheYear.

If the Grammys somehow say no to all three of them, maybe country artist Ingrid Andress can pull off a surprise win. Andress is definitely hurt by country’s history in BNA (not stellar, as LeAnn Rimes, Carrie Underwood and Zac Brown Band are the only country artists to win here), and she’s not as big of a commercial success as a those previous country champs. Noah Cyrus, who has also moved towards a more Americana-leaning sound, might also siphon votes from her.

The remaining nominees — Chika, D Smoke and Kaytranada — will probably have to sit this one out, but it’s always nice being a Grammy-nominated artist, right? Especially since they won’t have the pressure of living up to the Best New Artist title.