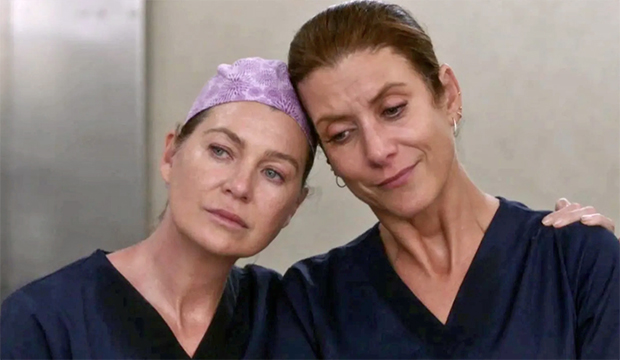 On October 14, Kate Walsh finally returned to “Grey’s Anatomy” after a decade-long break from the ABC medical drama. Viewers were delighted to see Dr. Addison Montgomery back at Seattle’s Grey Sloan Memorial for the first time since 2012, even as the hospital was dealing with an air conditioning outage in the middle of a heat wave (things were, shall we say, McSteamy). Addy gave us all the feels when she shed some tears with longtime foe Meredith Grey (Ellen Pompeo), caught up with doc-friends Miranda Bailey (Chandra Wilson) and Richard Webber (James Pickens Jr.) and shared some laughs with sister-in-law Amelia Shepherd (Caterina Scorsone).

Walsh’s long-awaited return is giving fans hope that other former characters could scrub back in to ABC’s 18-year-old series in the near future. Below, we’ve listed the Top 5 living characters we’d like to see again. (Remember, the dead ones returned last year during Meredith’s dream beach scenes.) Vote for your favorite in our poll.

Cristina Yang (Sandra Oh)
First appearance: Season 1, Episode 1
Last appearance: Season 10, Episode 24
How she left: Cristina reminisces with Meredith about old times before leaving for Zurich, where she’s been handed the keys to a research hospital by her former flame, Preston Burke (Isaiah Washington). In the years since, Cristina has kept in touch with Meredith via text message.

Izzie Stevens (Katherine Heigl)
First appearance: Season 1, Episode 1
Last appearance: Season 6, Episode 12
How she left: Izzie recovers from her Stage 4 metastatic melanoma (the one that caused her to see the ghost of Jeffrey Dean Morgan‘s Denny), but is later fired for making a treatment error with a patient. She leaves Seattle forever and soon files for divorce from new hubby Alex.

Alex Karev (Justin Chambers)
First appearance: Season 1, Episode 1
Last appearance: Season 16, Episode 16
How he left: Alex shocks everyone by resigning from Grey Sloan Memorial and divorcing his wife Jo Wilson (Camilla Luddington), all when he learns that he is the father of Izzie’s two children. He writes letters to Meredith, Jo, Miranda and Richard, informing him of his decision to live with his new family in Kansas.

Callie Torres (Sara Ramirez)
First appearance: Season 2, Episode 19
Last appearance: Season 12, Episode 24
How she left: Callie and Arizona begin having marital problems, which results in them getting a divorce and Callie dating Penny (Samantha Sloyan), aka the doctor responsible for Derek’s death. Ultimately, Callie decides to move to New York with her daughter Sofia.

Arizona Robbins (Jessica Capshaw)
First appearance: Season 5, Episode 11
Last appearance: Season 14, Episode 24
How she left: Soon after Alex and Jo’s wedding, Arizona decides to leave her Seattle life behind to be with Callie and Sofia in New York. Presumably, the two women have reconciled and are now living happily ever after as a family unit.