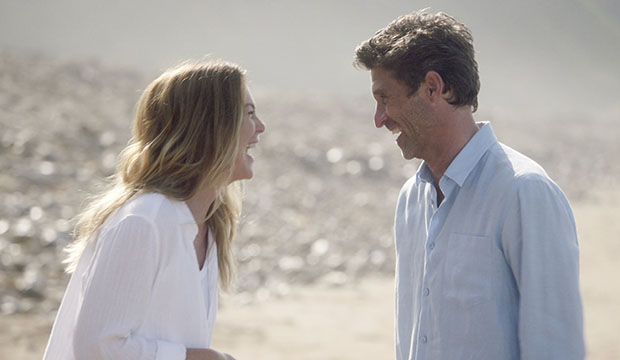 For years, Kyle Chandler was the most memorable guest star and the only actor to have ever received an Emmy nomination for Best Drama Guest Actor for their turn on “Grey’s Anatomy.” Now Patrick Dempsey, who reprised his fan-favorite role as Derek Shepherd, aka McDreamy, in Season 17 of the ABC medical drama, is trying to change that.

Chandler appeared in two episodes of Season 2 of “Grey’s Anatomy” prior to taking on the role of Coach Eric Taylor in “Friday Night Lights,” for which he won the Emmy for Best Drama Actor for the show’s final season in 2011. On “Grey’s,” Chandler guest-starred as Dylan Young, the hunky bomb squad member who died when the bomb that had been inside of a patient exploded as he attempted to dispose of it. Chandler received an Emmy nomination — his first ever — for his memorable performance. And while six actresses have been nominated in the Best Drama Guest Actress category for a total of nine times (with Loretta Devine winning in 2011), no actor has been recognized in the corresponding actor category since Chandler in 2006.

Dempsey, who was a series regular on “Grey’s Anatomy” from the series premiere until the character’s death in Season 11 in 2015, returned this past season as a guest star when Meredith (Ellen Pompeo) fell ill with COVID-19 and slipped in and out of consciousness. While she was out, Derek appeared in a dream sequence, as did several other old characters. Although Meredith wanted to be with Derek, he told her it was not her time yet and urged her to return to their children. Longtime fans of the series loved to see the two lovebirds reunited, even if it was on a weird CGI beach. But was the performance enough to earn Dempsey a Best Drama Guest Actor nom?

SEE After his shocking exit, Patrick Dempsey could finally get an Emmy nomination for ‘Grey’s Anatomy’

The actor is currently sitting in sixth place with 18/1 odds in Gold Derby’s combined odds. He trails Charles Dance (“The Crown”), Courtney B. Vance (“Lovecraft Country”), Michael Angarano (“This Is Us”), Mark Hamill (“The Mandalorian”) and Timothy Olyphant (“The Mandalorian”). Dempsey’s former “Grey’s Anatomy” co-star T.R. Knight is way back in 14th place for his own guest turn on the ABC soap.

With only five spots this year, Dempsey’s current placement in the odds does not appear to bode well for him, at least not upon first glance. But a brief look at recent past nominees and winners reveals that while there is not much of a pattern in terms of nominees, when it comes to winners, voters have taken a liking to actors who’ve given emotional performances. Ron Cephas Jones has twice won (2018, 2020) for his performance on the family drama “This Is Us” and surprisingly was not submitted this year. Gerald McRaney won for his turn on the same show in 2017. That bodes well for Angarano, who was previously nominated for “This Is Us” in 2019. A nomination for Dempsey would seem to fall into a similar category in that it definitely worked its magic on viewers.

Meanwhile, although fans are hot for “The Crown,” Emmy voters remain lukewarm toward its guest performers. Only one — Matthew Goode — has ever received a guest nomination. And only two performers have ever actually won an Emmy (Claire Foy, John Lithgow). Therefore, we’re not entirely sold on Dance scoring a bid for his portrayal of Lord Mountbatten in Season 4 of the Netflix drama. And while Emmy voters recognized Giancarlo Esposito’s guest turn on “The Mandalorian” in Season 1, there’s no guarantee that both Hamill and Olyphant will nab nominations for their performances in Season 2, if either of them do. Four other “Mandalorian” guest stars — Bill Burr, Carl Weathers, Titus Welliver and Horatio Sanz — were submitted. Both actors made headlines when they appeared, but Emmy voters have never fallen in love with Olyphant the way he deserves, and while Hamill could be an easy name-check, he is submitted for a brief, de-aged cameo in which a body double was used. That leaves us with Vance, a previous winner for “The People v. OJ Simpson: American Crime Story” but whose current show has underperformed. He’s also in the running for his supporting performance on the Nat Geo series “Genius: Aretha,” for which he’s in eighth place in the odds.

What this means is that there are several possible avenues for Dempsey to take to score “Grey’s Anatomy’s” first Best Drama Guest Actor nom since Chandler. If anyone can do it, it’s probably him. And if he is successful come July 13, it would be more than impressive, especially since he was never nominated for Best Drama Actor during his entire decade-plus tenure on the show.