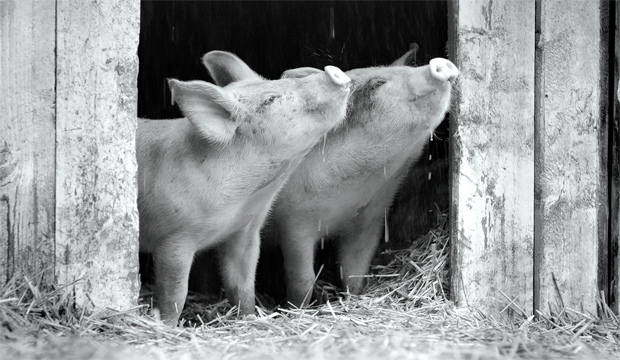 When Joaquin Phoenix won his Oscar for “The Joker” last year, he decided to use his platform to “give a voice to the voiceless” during his acceptance speech broadcast to millions of viewers around the globe. In a passionate plea for humanity to elevate itself, the actor called on his species to reconnect with the “natural world,” shining a spotlight on animal rights. At the time, Phoenix had no idea his next screen credit would be as executive producer on one of 2020’s most acclaimed documentaries, “Gunda,” a film that had an emotional impact on the actor and saved the life of a lovable sow in Norway.

Shot in black and white with no dialogue, “Gunda” is the celebrated documentary from filmmaker Viktor Kossakovsky, which follows the daily life of a pig as she navigates life on a farm, giving birth to a litter of piglets, snorting and rolling around in the mud. If it sounds simplistic, it is, and that’s exactly why critics have been singing the film’s praises since it premiered at the Berlin International Film Festival in February of 2020.

When crew members of the film heard Phoenix’s Oscar speech, they contacted the actor to show him an early screening. Moved by its message and heartwarming subjects, the actor quickly signed on to executive produce the film in hopes of garnering it more widespread attention. The partnership paid off and the project has been racking up various critics prizes and is now shortlisted among the 15 eligible films to be nominated for the Best Documentary Feature Oscar.

“Gunda” has a red-hot 97 percent freshness rating on Rotten Tomatoes and a Metacritic score of 90, solidifying the Neon production as a serious contender at the Oscars. Jonathan Romney of “Screen Daily” writes, “You don’t have to be an animal lover to appreciate the craft and the genuine poetic vision of a film which, though strictly unsentimental, is intensely moving, transfixing and quite genuinely unique.” Eric Kohn of “Indiewire” called it a “slow burn” that “feels like an advancement of the nature documentary form.”

The affection viewers feel for these animals is captured by long shots into their eyes, as if to give us a glimpse of what they might be thinking. Intentionally non-political, Kossakovsky (who is a vegetarian) made a point to let audiences draw their own conclusions and kept any personal opinions out of the film. In a Q&A with Phoenix, the director explained that with equipment of the highest possible quality, he set up cameras and returned to farms across Norway, Spain and the United Kingdom over several months to show the growth of the litter and Gunda’s natural instincts as a mother. As supporting characters of sorts, two cows and a one-legged chicken are also seen going about their daily lives on the farm.

The Critics Choice Documentary Awards recently recognized “Gunda” with a nomination for Best Documentary Feature, along with below the line bids for its cinematography, editing and directing. Impressively, Kossakovsky is responsible for all of it. Another important precursor “Gunda” can check off is a nomination from the International Documentary Association, which has included the eventual Oscar winner in its lineup four out of the last seven years.

Although “Gunda” never shows the impending doom of the animals it follows, viewers are left to assume the obvious. For its headlining subject, however, the spotlight was lifesaving. With her newfound fame, Gunda was spared by farmers to live out the rest of her natural days on Earth, drawing comparisons to fictional peers like “Babe” and Wilbur in “Charlotte’s Web.” Should Oscar voters deem “Gunda” worthy of a nomination, Phoenix and Kassakovsky hope the film hailed as a catalyst for veganism could have an even greater impact on farm animals across the world.