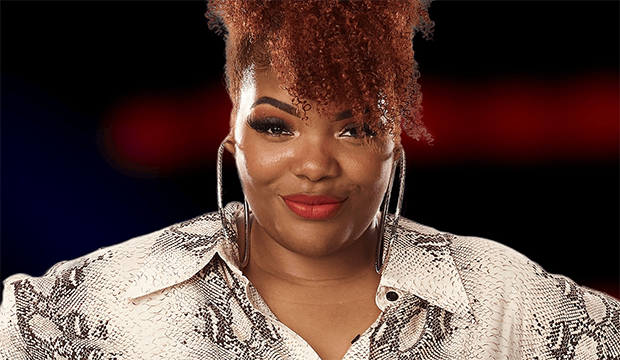 Over the past three weeks, five artists have been eliminated on “The Voice.” Of this group of ousted singers, who do YOU think most deserves to return to NBC’s reality TV show in the upcoming semi-finals? According to our recent poll, Gymani has the most support with 36% of the vote. This member of Team Kelly Clarkson started out the competition as a four-chair turn with her blind audition of “POV,” but she failed to connect with America in the live shows. Do you agree or disagree with your fellow “Voice” viewers?

Here are the complete poll results for who our readers think “The Voice” should bring back in the semi-finals:

Despite being an early fan-fave, this 23-year-old Georgia native first found herself in the bottom during Top 13 week, when her “save me” song of “Sweet Love” won over the instant save viewers over Shadale (“Breathe”) and Ryleigh (“Dangerous Woman”). The very next week, she appeared in the bottom again, this time singing “Tell Me Something Good” and losing the instant save to Jim & Sasha Allen (“I Won’t Give Up”).

Holly and Jeremy left “The Voice” in a double elimination during “challenge week,” which is when the coaches challenged all of their artists to perform songs outside of their genres. Holly took on a fast-paced disco song (“Last Dance”) while Jeremy tried out a recent country song (“Freedom Was a Highway”). Both iterations failed to impress America, and the contestants were eliminated when they lost the instant save to Jershika Maple.

Here are the remaining eight artists competing in next week’s Season 21 semi-finals: Wendy Moten, Lana Scott and Paris Winningham of Team Blake, Girl Named Tom and Hailey Mia of Team Kelly, Jershika Maple and Joshua Vacanti of Team Legend and Jim & Sasha Allen of Team Ariana. Who do you have your eye on for an ultimate spot on “The Voice” winners list?