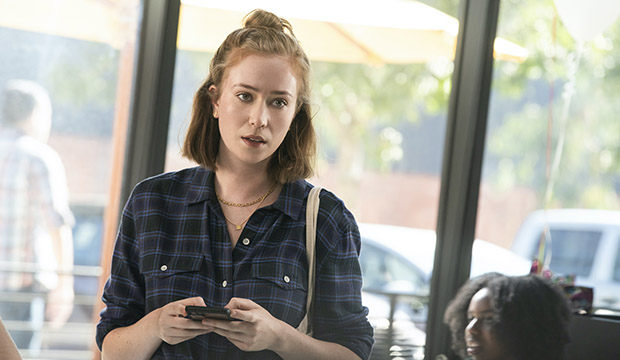 Emmy nominations for breakthrough performances by newcomers don’t happen very often, but Hannah Einbinder, the second half of HBO’s blisteringly funny new comedy “Hacks,” is making a solid case for consideration. The actress, who Vulture named an up-and-coming comedian to watch in 2019, is more than holding her own against the talents of Jean Smart, a veteran who’s in the midst of a career resurgence that first began with a memorable turn on FX’s anthology crime series “Fargo.”

Einbinder stars in the series as Ava, a young, entitled comedy writer whose recent missteps on Twitter have made her virtually unemployable in Hollywood. As a result, her agent sends her to the hot and dusty streets of Las Vegas to become the writing partner of Smart’s Deborah Vance, a comedy pioneer and legendary comic in need of new material who ends up becoming a reluctant mentor to the younger woman.

Since the debut of “Hacks” on May 13, Einbinder has risen to 14th place in Gold Derby’s combined odds for Best Comedy Supporting Actress. Her placement there instead of in lead alongside Smart feels reminiscent of Rose Byrne being submitted in supporting during her time on “Damages.” Although she was the lead on the FX drama, at least during the first two seasons, she was not as well known at the time and ended up in supporting, where she nabbed two nominations for the second and third seasons, while Glenn Close, who in addition to being an established actress also gave a big, showy performance not unlike Smart, competed in lead. Close took home the Emmy twice during the show’s run.

SEE Is 2021 finally Jean Smart’s year at the Emmys?

While perhaps not as obvious a case as Byrne, Einbinder, the daughter of “Saturday Night Live” alum Laraine Newman, is arguably still a co-lead on “Hacks,” and perhaps if she wasn’t a newcomer, she could make a stronger case to be submitted as such. But there is also a valid strategic argument for her to go supporting that has little to do with her status as a relative unknown. If we look at recent shows with two women as co-leads who were submitted in lead, like “Killing Eve” or “Dead to Me,” the more famous or traditionally successful at the Emmys of the two actresses (Sandra Oh, Christina Applegate) has gotten in initially while the “less famous” of the two (Jodie Comer, Linda Cardellini) only followed a year later. (And Comer actually won for her performance, while Oh has yet to take home an Emmy.)

While the comedy fields don’t have many returning nominees on account of many shows being off-cycle due to the pandemic, it seems unlikely both Smart and Einbinder would be able to succeed in the lead actress race at this stage. Kaley Cuoco (“The Flight Attendant”) has been the frontrunner in Gold Derby’s odds for a while after nabbing Golden Globe and individual Screen Actors Guild Award nominations, and the rest of the predicted field is made up of either former nominees or winners — Smart, Tracee Ellis Ross (“Black-ish”), Allison Janney (“Mom”) and Lena Waithe (“Master of None”) — or actresses like Jane Levy (“Zoey’s Extraordinary Playlist”) and Maya Erskine (“PEN15”) who are benefiting from having been around longer and are now taking advantage of a more open field.