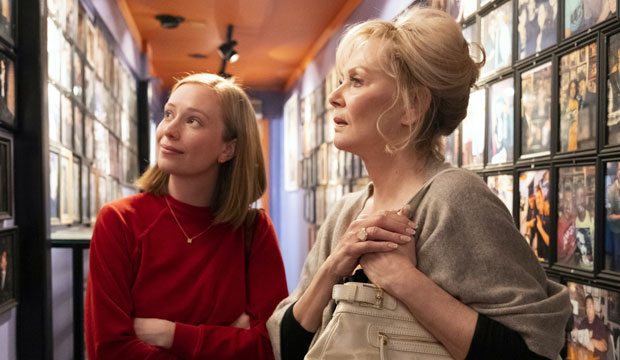 Immediately after she was named the best comedic TV actress of 2020 by the Screen Actors Guild, Catherine O’Hara praised her “Schitt’s Creek” costar Annie Murphy as “a beautiful soul” and stated, “I share this with [her].” The on-screen mother-daughter duo were placed in direct competition here less than seven months after they both triumphed at the Emmys, where O’Hara was deemed a lead while Murphy was classified as supporting. Since SAG does not separate TV performers by role size, showdowns like this are fairly common. Indeed, there has been at least one instance in this category ever year since 2017, and Hannah Einbinder and Jean Smart of “Hacks” are now looking to continue the tradition.

HBO Max’s “Hacks,” the first season of which concluded in June, focuses on struggling Las Vegas stand-up comedian Deborah Vance (Smart) and her new writing partner Ava Daniels (Einbinder) as they navigate their working relationship and personal lives. Earlier this year, Smart was awarded a Best Comedy Actress Emmy for her work, while Einbinder competed as a supporting player against eventual winner Hannah Waddingham (“Ted Lasso”). Now that all three women are in the running for bids for the same SAG award, the results are bound to be unpredictable up to the end.

Since 2000, 10 pairs of costars have battled each other for SAG’s Best TV Comedy Actress prize. Most of them, including O’Hara and Murphy, campaigned separately elsewhere, while only a few ran as co-leads or members of an all-supporting ensemble. The first women to add their names to this list were “Ally McBeal” castmates Calista Flockhart and Lucy Liu, both of whom ended up losing to Lisa Kudrow (“Friends”). Debra Messing and Megan Mullally (“Will & Grace”) were then both bested by Sarah Jessica Parker (“Sex and the City”) in 2001, but Mullally came out on top when she faced Messing again in 2004.

Parker also competed against her castmate, Kim Cattrall, in the 2002 race, which was ultimately won by Mullally. Mullally’s victory in 2004 was also over “Everybody Loves Raymond” duo Patricia Heaton and Doris Roberts, who contended again in 2005 but lost to Teri Hatcher (“Desperate Housewives”). They were followed in 2008 by America Ferrera and Vanessa Williams (“Ugly Betty”), who watched Tina Fey (“30 Rock”) take home the trophy.

Betty White (“Hot in Cleveland”) then beat Julie Bowen and Sofia Vergara (“Modern Family”) in 2012, five years before Julia Louis-Dreyfus (“Veep”) defeated Jane Fonda and Lily Tomlin (“Grace and Frankie”). Fonda and Tomlin are the only pair on this list to face off more than twice, having also both lost to Louis-Dreyfus again in 2018 and Rachel Brosnahan (“The Marvelous Mrs. Maisel”) in 2019. Brosnahan won over her own costar, Alex Borstein, and they both then lost to Phoebe Waller-Bridge (“Fleabag”) in 2020. 2021 was the third year (after 2004 and 2019) in which there were double instances, as “Dead to Me” stars Christina Applegate and Linda Cardellini appeared in the lineup alongside the “Schitt’s Creek” ladies.

According to our SAG odds, Smart currently ranks ahead of all of her competitors, including Einbinder, who is in seventh place behind Waddingham, Elle Fanning (“The Great”), Sandra Oh (“The Chair”), Issa Rae (“Insecure”), and Selena Gomez (“Only Murders in the Building”). The aforementioned five-year trend in this category bodes well for them, as does the fact that two of the last three cases resulted in a win for one of the costars. These would be Einbinder and Smart’s respective first and second nominations, as the latter was recognized as part of the “24” ensemble in 2007.