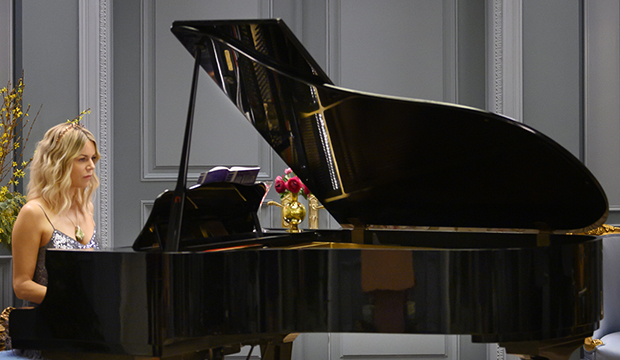 Jean Smart might be getting all the attention, and Hannah Einbinder might be climbing up the Emmy odds, but there is a third leg of the “Hacks” tripod that people seem to be overlooking or outright forgetting when it comes to the show: Kaitlin Olson, who is also eligible in the Best Supporting Comedy Actress category and deserves to be recognized for her own stellar performance in the HBO Max comedy.

Olson stars as DJ, the entitled adult daughter — and only child — of Smart’s Deborah Vance, a comedy pioneer who brings on a young writer (Eindinber’s Ava) to help her revamp her Vegas act and revitalize her career. DJ, who’s spent most of her life trading on her mother’s fame while simultaneously blaming it for all her problems, still relies on her mother at 40, perhaps more than she even realizes. And their relationship is often contentious as a result, with angry outbursts and immature behavior from both women framing genuine moments of love and compassion between mother and daughter.

Olson toes the line between outrageous comedy and emotional storytelling well, nailing the moments when DJ is the loud spokesperson for spoiled adults who refuse to grow up just as easily as when the script calls for the character to be open and honest about herself and her relationships. “I’m not dumb, I know that I gotta own my actions,” she tells Ava in the show’s fourth episode, titled “D’Jewelry.” “But she’s the reason I’ve been in recovery for 20 years. Twenty years! And do you think she’s ever once come to a meeting with me? No, not one.”

DJ might be privileged and angsty and ask people to time her while chugging margaritas after selling unflattering photos of her mom to outlets like TMZ, but she also just wants to make her mother proud. She’s on the precipice of being just self-aware enough that you empathize with her situation and realize there’s a human being in pain beneath it all. And then DJ plays the “Jurassic Park” theme on the piano at her “35th” birthday party and you’re reminded that Olson is a woman who knows a thing or two about comedy and giving range to characters who could easily be one-note caricatures.

Since 2005, Olson has starred as Sweet Dee, the lone woman in a sea of depraved men on the FX/FXX comedy “It’s Always Sunny in Philadelphia.” If you’ve spent any amount of time watching her performance on that show, you already know she has an awe-inspiring ability to pivot, sometimes in the very same scene, between instances of broad, vulgar absurdity and more subtle moments in which her character tries to cover up the deep insecurities within. While DJ is not inherently a bad person the way Dee is, they are both the byproduct of their upbringing and there is clearly overlap in the way Olson is able to bring small moments of humanity to both women while still hitting all the right notes to ensure you never forget how ridiculous they are.

Unfortunately for Olson, though, it seems like people might be overlooking her performance as DJ the same way they’ve repeatedly overlooked her stellar work as Dee. It’s well past time for Emmy voters to open their eyes and recognize what exactly she is capable of doing week to week. Because Olson is one of the finest comedians working today, able to deliver lines about “horrific urethra pain” and make them funny in their cringe-worthiness. She more than holds her own against Smart on “Hacks,” a show that highlights, in more ways than one, the multitudes that women contain. So while DJ might stand out for her louder moments, it’s clear that there is more to the woman underneath, and that’s really all thanks to Olson’s performance.