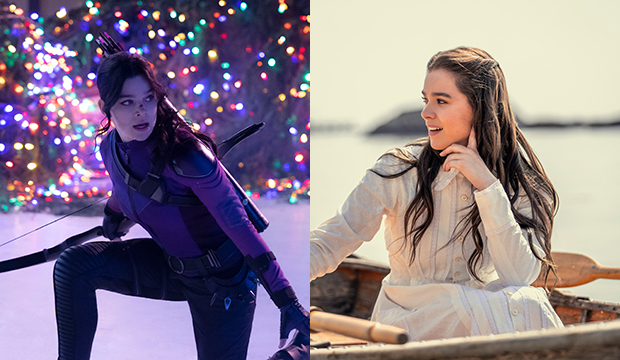 What is it about the Marvel superhero series “Hawkeye?” Both its stars are leading two shows on two different streaming services at the same time. While Jeremy Renner has the grim prison drama “Mayor of Kingstown” on Paramount+, Hailee Steinfeld is wrapping up her third and final season on Apple TV+’s critically acclaimed period comedy “Dickinson,” in which she portrays the poet Emily Dickinson.

We know pulling double duty this fall and winter was a fluke of the scheduling gods, but with “Hawkeye” and “Dickinson” airing concurrently, it offers viewers a unique opportunity to see what, exactly, Steinfeld is capable of. Perhaps unsurprisingly, the Oscar and Screen Actors Guild Award nominee for 2010’s “True Grit” is stellar in both roles. As the 22-year-old Kate Bishop in “Hawkeye,” she brings infectious enthusiasm and excellent comedic timing to the story of an exceptionally capable young archer cutting her teeth as a rising hero. Steinfeld imbues Kate with the right amount of stubbornness that she doesn’t just play well off Renner’s exhausted Clint Barton but also regularly steals the show. In “Dickinson,” she’s never been better, giving a sharp, confident, and joyful performance that anchors the anachronistic comedy and brings it to life.

Since “Hawkeye” and “Dickinson” concluded their runs just days apart from one another right before Christmas (presuming that “Hawkeye” is actually a true limited series and won’t return for Season 2), we’re taking stock of Steinfeld’s SAG Award chances for both performances. And you might be surprised to find out which role gives her the better odds.

SEE ‘Hawkeye’ finale: What that major reveal means for the future of the MCU

For her work in “Hawkeye,” Steinfeld is on the rise in the race for limited series/TV movie actress. However, she’s still sitting outside the top 10 in Gold Derby’s combined odds; she’s currently in 17th place with 100/1 odds. This isn’t all that surprising given that in non-genre specific categories voters tend to favor dramatic performances — like the one that has Kate Winslet (“Mare of Easttown”) leading the category with 16/5 odds — over comedic ones. And although Steinfeld has been able to showcase her range with a few well-placed emotional and dramatic moments throughout the six-episode series, her performance is largely comedic in nature.

Luckily, comedy is the point when it comes to “Dickinson,” and Steinfeld is faring slightly better in the race for TV comedy actress. She currently sits in 15th place in a category led by recent Emmy winners Jean Smart (“Hacks”) and Hannah Waddingham (“Ted Lasso”), both of whom will be fighting off co-stars Hannah Einbinder (seventh place) and Juno Temple (eighth), respectively. There is still time for Steinfeld to make a final push — nomination voting doesn’t close until Jan. 9 — but it will need to be significant if she hopes to make it into the top five, which currently also includes Elle Fanning (“The Great”), Issa Rae (“Insecure”) and Selena Gomez (“Only Murder in the Building”).

The fact that this is the last chance for voters to honor her “Dickinson” performance could work in Steinfeld’s favor, as could the fact the show is airing during the voting period. But it still seems like anything from Apple TV+ not titled “Ted Lasso” tends to get lost in the weeds no matter the quality on display. Fortunately, Steinfeld is one of the finest actresses of her generation, and she has been proving it for more than a decade now. SAG-AFTRA voters would be smart to consider this. After all, they nominated her for “True Grit,” and she was just a child then. She’s only gotten better in the years since.