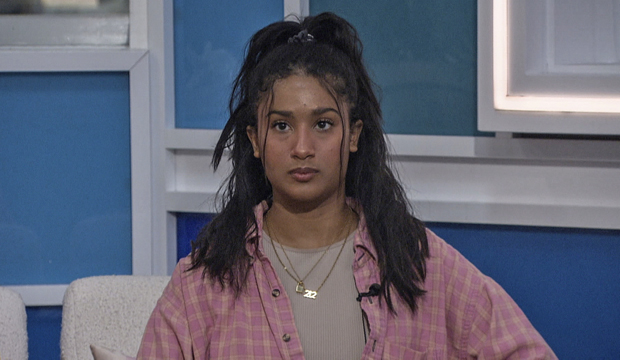 “Big Brother” host Julie Chen Moonves dropped a bombshell on the houseguests during Thursday’s live episode, surprising them with the second double eviction in a row. After the house sent Tiffany Mitchell packing, Azah Awasum rose to power by winning her first Head of Household competition of the Season. She nominated Hannah Chaddha and Xavier Prather for eviction. After Kyland Young won the Power of Veto, he saved Xavier and forced Derek Frazier onto the block. Hannah was then evicted by a vote of 2-0.

“My face dropped because I thought that Azah’s target would have been Ky,” Hannah admitted during her exit interview with Julie. “She’s been pretty vocal about coming after Ky for the past few weeks, or at least when we got to the point of the final six. I was shocked that she didn’t initially put Ky on the block. I thought her and Xavier maybe had some sort of deal in place. And then of course, there’s me. For her own game Azah should have kept me. I do still believe that the guys are working together even if they don’t have a final three. I think they’ve maybe made an agreement to protect each other and look out for each other in this game. For Azah’s personal game, I believe that she should have kept me.”

Despite being surprised by her initial nomination, Hannah didn’t believe she was Azah’s target. “I don’t really see her having a final four deal with Kyland, however, I don’t think she was aware that Kyland was going to use the Veto on Xavier, which I knew because Kyland expressed to me how he wanted to go to the end with strong competitors. I guess I’m not worthy in his eyes. If I were HOH, I would have put Kyland on the block to ensure the Veto wasn’t used by someone who wasn’t on the block. Azah apparently didn’t know that, maybe I was her target.”

After Tiffany’s eviction, Hannah questioned if she had a path to the finale. “Well, here we are!” she exclaimed. “That’s how I felt initially just because I’ve been playing this game very closely with Tiffany since week one, but once I discovered that I would be on my own, my fight or flight response kicked in. I had to figure out a path whether that be making deals with Ky, Xavier, Big D and Azah. I tried proposing a deal to each of those people in order to protect myself in this game and ensure my longevity, but Azah didn’t know that Ky was gonna use the Veto on X and I was collateral.”

“For me there were moments that were challenging,” she said of her role in the Cookout. “Such as me having a hand in sending Derek [Xiao] home, me having a hand in sending Claire [Rehfuss] home. Two of my closest allies outside the Cookout. The Cookout always came first and even though I’m sitting out here and I came in fifth place I feel like a winner. Because of me and five other people there will be a Black winner of ‘Big Brother’ for the first time in history.”

What was the best part about playing “Big Brother”? “I came in saying I wanted to play a ruthless game filled with backstabs, blindsides and betrayals,” Hannah admitted. “That is the game I wanted to play. But alas, I walked in and I saw five other faces similar to mine so that changed. The best part of playing ‘Big Brother’ would be last week when we got the Cookout to the final six.”