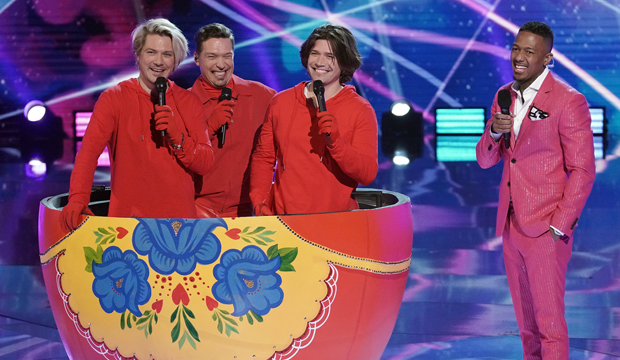 History was made after the Feisty 5 took the stage on Wednesday night’s episode of “The Masked Singer.” When all of the votes were tallied the Russian Dolls were on the chopping block and for the first time ever an entire band was unmasked. Multi-platinum pop group Hanson, consisting of brothers Isaac, Taylor and Zac, were revealed to be the wooden figurines following their energetic performance of “I’m Still Standing.”

“It’s been a blast,” Taylor told host Nick Cannon during their unmasked interview. “The fact that you spent all these years performing you’re always seen as a certain thing. People think that they know what you are and to be able to just start with music and focus on singing and just be able to say, hey, you don’t know what’s behind this.”

“The thing about us is we would normally be touring,” Zac added. “We had this unique opportunity to do something very different and play to a whole new audience. We have never taken to the stage wearing matching outfits before but I think this might become a thing.”

Panelists Jenny McCarthy and Nicole Scherzinger were both able to piece together enough clues to realize the “MMMbop” singers were parading around as babushkas of decreasing size. Ken Jeong incorrectly guessed another set of siblings with the Jonas Brothers and Robin Thicke thought the Russian Dolls were country duo Sugarland. None of the panelists were correct with their first impression guesses so no points were scored in the quest for the Golden Ear trophy.

Throughout the season there were various hints in the Russian Dolls’ clue packages that pointed to Hanson. The M’s in their package – including the Letterman jacket – were a nod to Hanson’s song, “MMMbop.” The Weird Al Yankovic clue is a nod to Weird Al’s famous cameo in Hanson’s “Thinking ‘Bout Somethin'” music video. The puppet strings and banjo strings in Russian Dolls’ packages were a clue to Hanson’s orchestral album, “String Theory.”

The Black Swan, Chameleon, Piglet and Yeti will battle it out in next week’s semifinals. Nine singers were unmasked this season prior to Hanson as the Russian Dolls: Kermit the Frog as the Snail, Caitlyn Jenner as the Phoenix, Danny Trejo as the Raccoon, Logan Paul as Grandpa Monster, Nick Cannon as the Bulldog, Mark McGrath as the Orca, Bobby Brown as the Crab, Tamera Mowry-Housely as the Seashell and Tyrese Gibson as the Robopine.